As Myanmar faces charges of genocide at the International Court of Justice over its brutal crackdown on the Rohingya, hundreds of thousands from the Muslim minority struggle in squalid Cox's Bazar camps where Covid-19 has reared its ugly head.

The first coronavirus case has been confirmed in the world's largest refugee camp in southern Bangladesh, containing more than 1 million Rohingya refugees.

An ethnic Rohingya refugee and another person have tested positive for Covid-19, a senior Bangladeshi official and a UN spokeswoman said. It was the first confirmed case in camps more densely populated than most crowded cities on Earth.

"Today they have been taken to an isolation centre after they tested positive," Mahbub Alam Talukder, the Refugee Relief and Repatriation Commissioner

Teams have been activated for treatment of the patients as well as tracing people they may have encountered and quarantining those contacts, Louise Donovan, a spokeswoman for the UN refugee agency said.

Nationwide, Bangladesh has confirmed 18,863 cases, including 283 fatalities. But the toll is thought to be higher since adequate testing facilities are a challenge in the South Asian nation of 160 million people.

Aid workers have been warning of the potential for a serious outbreak if the virus spread into the densely crowded camps. Donovan said Thursday that 108 Rohingya refugees in Cox’s Bazar have been tested for the new coronavirus since the beginning of April.

Dr Shamim Jahan, Save the Children's health director in Bangladesh, said in a statement the virus already had overwhelmed the country.

"There are only an estimated 2,000 ventilators in all of Bangladesh, serving a population of 160 million people. In the Rohingya refugee camps – home to nearly a million people – there are no intensive care beds at this moment", he said.

"Now that the virus has entered the world's largest refugee settlement in Cox's Bazar we are looking at the very real prospect that thousands of people may die from Covid-19. This pandemic could set Bangladesh back by decades."

With about 40,000 people per square kilometre living in plastic shacks side by side, the 34 camps have more than 40 times Bangladesh’s average population density. Each shack is barely 10 square meters and many are overcrowded with up to 12 residents.

"Here, people are living 40,000 to 70,000 people per square kilometre. That’s at least 1.6 times the population density on board the Diamond Princess cruise ship, where the disease spread four times as fast than in Wuhan at the peak of the outbreak," said Manish Agrawal, Bangladesh Country Director at the International Rescue Committee.

"Without efforts to increase healthcare access, improve sanitation, isolate suspected cases and decongest the camp the disease will devastate the refugee and local population here, where there is a much lower standard of living and a higher rate of existing illness that make refugees more susceptible to the virus," he said.

The UN and the government said about 1,200 beds for isolating and treating Covid-19 patients were being readied just outside the camps at Ukhiya and Teknaf in Cox’s Bazar. A plan was also underway for an additional 1,700 beds in cooperation with the International Organization for Migration, UNICEF and Save the Children International.

Aid agencies and rights groups have also been demanding Bangladesh’s government withdraw restrictions on using mobile phones and internet in the camps. Authorities had suspended internet use inside the camps for security reasons.

Daniel P. Sullivan, a senior advocate for Human Rights of the Refugees International, said the restrictions were holding back vital information.

“The lack of access to accurate information is fueling misinformation, and rumors abound in the camps that Covid-19 is always fatal or that the faithful will be safe,” Sullivan said in a statement.

Most of the Rohingya were persecuted from Myanmar since August 2017, when Myanmar’s military launched horrid attacks on civilian villages, including mass rapes, killings and burning thousands of homes.

Authorities in Myanmar have long used the pre-text that Rohingya belong in Bangladesh, even though their families have lived in the Buddhist-majority country for centuries.

Myanmar has been accused of burning Rohingya villages to eradicate them from existence and nullify identity documents containing the village names as birth locations.

Nearly all Rohingya have been denied citizenship since 1982, effectively rendering them stateless. They are also denied freedom of movement and other basic human rights including education.

More than 730,000 Rohingya were persecuted from Myanmar in late 2017 after fleeing another harsh military crackdown.

Myanmar is facing charges of genocide at the International Court of Justice in the Hague over the violence. 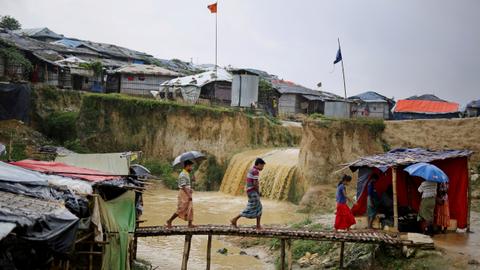