Japan’s former Foreign Minister Fumio Kishida has won the governing party leadership election and is set to become the next prime minister.

Kishida replaces outgoing party leader Prime Minister Yoshihide Suga, who is stepping down after serving only one year since taking office last September.

As new leader of the Liberal Democratic Party, Kishida is certain to be elected the next prime minister on Monday in parliament, where his party and coalition partner control the house.

Kishida beat Taro Kono, the vaccinations minister, in a runoff after moving ahead of two female candidates Sanae Takaichi and Seiko Noda in the first round.

The new leader needs to change the party's high-handed reputation, worsened by the outgoing Prime Minister Yoshihide Suga who angered the public over his handling of the coronavirus pandemic and insistence on holding the Olympics in Tokyo this past summer.

Wednesday’s vote is seen as a test of whether the party can move out of Abe’s shadow.

His influence in government and party affairs has largely muzzled diverse views and shifted the party to the right, experts say.

The party vote could also end an era of unusual political stability and return Japan to “revolving door” leadership.

“Concern is not about individuals but stability of Japanese politics," Michael Green, senior vice president for Asia at the Center for Strategic and International Studies, told a telephone briefing on Tuesday.

“It's about whether or not we are entering a period in Japanese politics of instability and short-term prime ministership,” he said. “It makes it very hard to move forward on agenda."

Suga is leaving only a year after taking office as a pinch hitter for Abe, who suddenly resigned over health problems, ending his nearly eight-year leadership, the longest in Japan’s constitutional history. 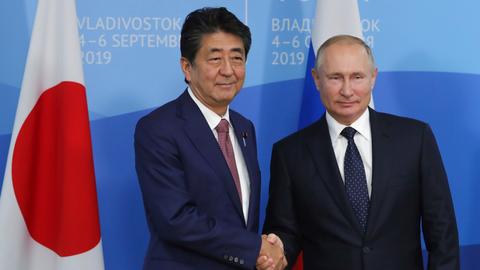