Has tourism eclipsed human rights in the Maldives?

Despite its famed luxury resorts, the government of Maldives has a troubled take on the rule of law.

Maldivians don’t see their country the same way tourists do.

“It's geographically beautiful — tourists love it. But it’s a tourism apartheid state,” Muju Naeem, a Maldivian activist now being resettled by the UN in Canada, tells TRT World.

Naeem is referring to how the idyllic beach haven might be just that — but it's also fast gaining a reputation for lawlessness.

The archipelago's dissidents allege that the government is hostile to the rule of law, turning a blind eye to disappearances, deaths and allegations of torture.

Dissidents are being silenced

In 2012, a new government headed by Abdulla Yameen came into power after removing the Maldives’ first democratically-elected president from power in a bloodless coup.

Yameen’s regime ushered in an era of corruption and the suppression of dissent. And in recent years, some young activists are paying a high price.

Take Yameen Rasheed — no relation to the president — a blogger who ran the political commentary website The Daily Panic. His website, that satirised the politics of the Maldives, earned him a slew of death threats. He was killed in his apartment hallway in April.

“I don’t think by focusing on the police or calling for justice for Yameen Rasheed, we will be able to achieve what we want to achieve,” Azim Zahir, a PhD candidate at the University of Western Australia, said.

To this day, his killers remain at large. “I think it’s time civil society organisations focused on the president himself. It is his responsibility,” Zahir said.

“It is my belief and the belief of the close friends of Yameen there has to be someone who gave the kill order, there is pre-meditation involved, and there have to be people behind it who are politically and religiously influential,” Naeem said. "I believe this is a religiously motivated murder, and a political murder.”

Ahmed Rilwan was another activist and also Rasheed’s friend. He was an outspoken critic of extremism and the culture of criminal gangs on the archipelago. He disappeared in 2014 after a ferry-ride home.

There is also Ismail Rasheed, a journalist who campaigned for religious tolerance. He was arrested for “attempted suicide” and survived an attempt on his life five years ago. He has now renounced public life.

Dissidents such as Yameen Rasheed, Ahmed Rilwan and Ismail Rasheed had shared demands: religious freedom, a transparent government and freedom of the press.

Their hopes seem to be in vain. The government has shorn off obligations towards human rights, culminating in its exit from the Commonwealth in 2016, after the 53 member bloc threatened action over the same issues.

The rule of law is deteriorating

A culture of impunity is fast developing. Police continue to drag their feet over the investigation over a 2013 arson attack on the pro-opposition Raajje TV studio in Male.

And Amnesty International has slammed the Maldivian government for its role “behind a relentless assault on the rule of law in the Maldives that has compromised the ability of the judiciary to carry out its functions independently.”

Dissidents who are arrested by the police face another threat. In early September, authorities suspended 56 lawyers — a third of all lawyers in the country — including opposition defence teams who had signed a petition demanding the rule of law in the 1,200 islands. This has rendered it impossible for activists to retain quality legal counsel.

Intolerance is on the rise

The chances of securing better rights in the immediate future seem unlikely. The Maldives has forged stronger relations with Saudi Arabia as it ramps up investment at home.

Earlier this year, the Maldivian government announced Saudi Arabia’s intention to invest a whopping $10 billion in the Faafu Atoll at the risk of uprooting locals who have long made a living off that land.

That $10 billion, along with the money invested in mosques and scholarships for Maldivians, does not come free.

Saudi has been spreading its own brand of Islam, Salafism, in the Maldives through these initiatives.

Reports say as of 2015, 200 Maldivians travelled to Syria to fight for Daesh, influenced by the spread of Salafism throughout the islands — a significant amount for a country of nearly 400,000.

Influence also flows in from farther east. China has developed deals to construct a bridge and an airport runway in the atoll, fulfilling the “string of pearls” theory, fuelling claims China is reaching westwards to cement its military and commercial influence.

The island state was under the rule of Maumoon Abdul Gayoom, who ruled the country with a dictatorial fist for 30 years before Maldivians pushed for change spurred by the murder in police custody of Evan Naseem, bringing reformist Nasheed into power in 2008.

Nasheed rolled the Maldives in a liberal direction and brought attention to the climate change that threatens to sink the islands. He was then ousted in a military coup in 2012 by the incumbent President Yameen, sentenced to 13 years behind bars on trumped up terrorism charges, and exiled to the UK.

A bleak future for the opposition

An emboldened Nasheed, armed with a coterie of international lawyers spearheaded by Amal Clooney, is looking to lead his Maldivian Democratic Party into the 2018 presidential election. The ousted president is looking to shore up support but has admitted that elections may not be held freely or fairly.

“I don't think MDP at the moment has a realistic chance of defeating the Yameen administration in next year's election. There wouldn't be a fair election and it would be nearly impossible to conduct political activities for MDP simply because they (Progressive Party of Maldives) use gangs as part of their arsenal to attack the opposition,” Naeem said.

“It’s very likely President Yameen would go in for a second term — not because he is the popular candidate but because he will manipulate the entire thing to be president.” 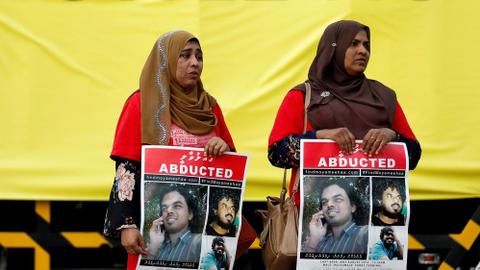