Humanitarian ceasefire to come into force on Monday in Nagorno-Karabakh

The ceasefire is due to take effect at 8 a.m. local time (0400 GMT) on October 26, the US State Department and the governments of Azerbaijan and Armenia said in a joint statement hours after a new fighting erupted between the two countries forces.

The United States has said a new humanitarian ceasefire will take effect on Monday in the conflict between Azerbaijan and Armenia over the occupied Nagorno-Karabakh, even as fresh fighting erupted between the two sides who blame each other for the failure of previous truces.

The ceasefire is due to take effect at 8 a.m. local time (12 a.m. EDT) on October 26, the US State Department and the governments of Azerbaijan and Armenia said in a joint statement on Sunday.

"Congratulations to Armenian Prime Minister Nikol Pashinyan and Azerbaijani President Ilham Aliyev, who just agreed to adhere to a ceasefire effective at midnight. Many lives will be saved," US President Donald Trump wrote on Twitter.

Congratulations to Armenian Prime Minister Nikol Pashinyan and Azerbaijani President Ilham Aliyev, who just agreed to adhere to a cease fire effective at midnight. Many lives will be saved. Proud of my team @SecPompeo & Steve Biegun & @WHNSC for getting the deal done!

The announcement came after US Secretary of State Mike Pompeo held separate meetings with the foreign ministers of Armenia and Azerbaijan in Washington on Friday.

"Those meetings were joined by the co-chairs of the OSCE Minsk Group, formed to mediate the conflict and led by France, Russia and the United States, which described them as "intensive discussions" on the ceasefire and the beginning of talks about core elements of a comprehensive solution.

The Minsk Group said its co-chairs and the foreign ministers agreed to meet again in Geneva on October 29.

But the eruption of new fighting on Sunday and the collapse of two previous ceasefires brokered by Russia raised questions about the prospects for this fresh push to end the clashes in Nagorno-Karabakh, a part of Azerbaijan populated and controlled by ethnic Armenians.

But new fighting erupted between Azerbaijan and ethnic Armenian forces on Sunday as both sides blamed each other for blocking a peaceful settlement to the conflict.

Armenia has accused Azerbaijani forces of shelling civilian settlements. Baku denied killing civilians and said it was ready to implement a ceasefire, provided that Armenian forces withdrew from the battlefield.

The weekend's clashes in and around Nagorno-Karabakh came after US Secretary of State Mike Pompeo hosted the foreign ministers of both countries in a new peace push on Friday.

The collapse of two Russia-brokered ceasefires had already dimmed the prospect of a quick end to fighting that broke out on September 27 over Nagorno-Karabakh.

Azerbaijan said its positions had been attacked with small arms, mortars, tanks, mortars, and howitzers.

"I am absolutely confident in the effectiveness of the peace negotiations but this also depends on the will of the Armenian side to take part in them," said Azerbaijan President Ilham Aliyev.

"Why can Azerbaijani and Armenian people live together in Georgia, Russia, Ukraine, and other countries but not in Nagorno Karabakh?" he added in a Fox News interview that was reprinted by the state Azertag News Agency.

World powers want to prevent a wider war that draws in Turkey, which has voiced strong support for Azerbaijan, and Russia, which has a defence pact with Armenia.

Aliyev said it was "very hazardous" for Armenia to want Russian military support in the conflict and third parties should not get involved militarily.

Russian President Vladimir Putin has said he hoped that the United States would help Moscow broker a solution to the conflict.

In the meantime, the Azerbaijani army continued its military operations to retake territories occupied for nearly 30 years by Armenian forces, the country's Defence Ministry said.

In a statement, the ministry said the country's forces were carrying out operations of varying intensity in the regions of Agdere, Khojavend, Fuzuli, Hadrut, Qubadli and Lachin throughout the night.

Armenian forces opened fire with tanks, artillery, and mortars, while the Azerbaijani army continued activities in the main directions in accordance with operation plans, expanding the areas under their control, the statement added.

The Armenian troops in Qubadli withdrew with manpower and equipment losses, with many of the soldiers sent from the region of Tsaghkadzor in Armenia to Nagorno-Karabakh neutralised, it said.

According to the statement, the Azerbaijani army destroyed two tanks, two armoured vehicles, four D-30 howitzers, one 2A36 Giatsint-B gun and seven cars belonging to the Armenian forces in different locations on the front.

READ MORE: Is there a path towards peace in the Armenia-Azerbaijan conflict?

Four UN Security Council resolutions and two from the UN General Assembly, as well as international organisations, demand the "immediate complete and unconditional withdrawal of the occupying forces" from occupied Azerbaijani territory.

In total, about 20 percent of Azerbaijan's territory – including Nagorno-Karabakh and seven adjacent regions – has been under illegal Armenian occupation for nearly three decades.

The Organization for Security and Co-operation in Europe (OSCE) Minsk Group – co-chaired by France, Russia, and the US – was formed in 1992 to find a peaceful solution to the conflict, but to no avail. A cease-fire, however, was agreed to in 1994.

World powers, including Russia, France, and the US, have called for a new cease-fire. Turkey, meanwhile, has supported Baku's right to self-defence and demanded the withdrawal of Armenia's occupying forces.

READ MORE: A military breakdown of the Azerbaijan-Armenia conflict 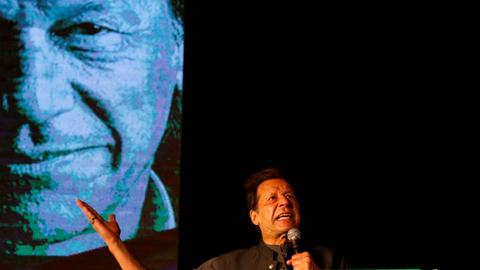