Budget proposal for the next five years is aimed at securing Tokyo's defence capabilities even as critics say that new policy shift violates country's pacifist constitution.

Japanese Prime Minister Fumio Kishida has set a new target for military spending over the next five years to 43 trillion yen ($318 billion), or 1.5 times the current level, as the country seeks to build up its defence including the use of preemptive strike.

The planned increase is "to firmly secure the necessities to pursue substantial reinforcement" of Japan's defence, Hamada said.

Kishida’s government is currently finalising a revision of its national security strategy and mid- to long-term defence policies, which would allow the use of preemptive strikes in a major shift to Japan's self-defence-only postwar principle.

The government says a "strike-back" capability is only for use in case of an imminent enemy attack.

The three key documents and the budget are expected in late December.

Japan has steadily stepped up its international defence role and military spending over the past decade.

It aims to double its military budget in the next five to 10 years to about two percent of GDP, citing a NATO standard, as threats from North Korea and China’s territorial assertiveness increase.

Kishida’s governing party wants to double Japan’s annual defence budget to about 10 trillion ($70 billion), which would make the country the world's No 3 military spender after the United States and China.

A government-commissioned experts' panel, in a report last month, said Japan needs to urgently reinforce its deterrence including by adding cruise missiles, interceptors and other equipment while improving commercial ports and airports for emergency military use.

However, for a country with an aging and declining population already struggling with a bulging national debt, funding the cost needed for the increase is not easy.

Kishida's plan apparently came as a compromise between the governing Liberal Democratic Party's initial request of 48 trillion yen ($355 billion) for the coming five years and the Finance Ministry's proposal of 35 trillion yen ($260 billion).

Plans for Japan's military buildup and spending increase also are a sensitive issue for many of its neighbours, including the two Koreas, which were victims of Japanese aggression in the first half of the 1900s.

China, meanwhile, has stepped up its claims to virtually the entire South China Sea by constructing artificial islands equipped with military installations and airfields, raising alarms in Tokyo.

Beijing also claims a string of islands that are controlled by Japan in the East China Sea, and has increased military harassment of self-ruled Taiwan, which it says is part of China to be annexed by force if necessary. 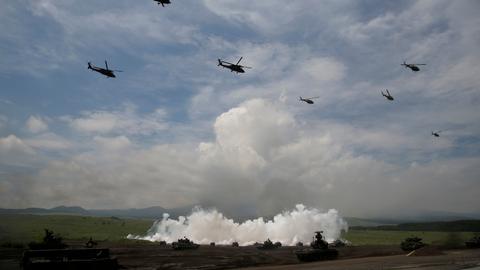