Judges rule ICC has jurisdiction over crimes committed against Rohingya

The International Criminal Court ruled on Thursday it is able to exercise jurisdiction over allegations of deportations of Rohingya people from Myanmar to Bangladesh as a possible crime against humanity.

Judges at the International Criminal Court have ruled that the court has jurisdiction to investigate widespread allegations that Myanmar forces have driven thousands of Rohingya Muslims from their homes.

The court said in a statement that the chief prosecutor must take the jurisdiction ruling into account "as she continues with her preliminary examination concerning the crimes allegedly committed against the Rohingya people."

The court says the preliminary probe, which aims to establish if there is sufficient evidence to launch a full-blown investigation, "must be concluded within a reasonable time."

Myanmar is not a member of the court, but Bangladesh is. 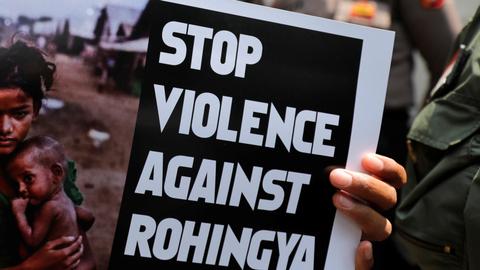 Rohingya sent back to Myanmar camps in ‘acute need’ — UNHCR