Pakistan has urged the international community to adopt a three-pronged approach to Afghanistan that includes quick aid to 14 million people facing a hunger crisis, promotion of an inclusive government, and working with Taliban to attack all terrorist groups in the restive country.

Pakistan's envoy to UN, Munir Akram, laid out his government's vision for the future international role in Afghanistan on Thursday, saying Islamabad has been in contact with regional countries and the broader global community on working together on the three priorities.

He stressed that humanitarian help must be the top priority and called it "very unhelpful" for Afghanistan's assets to have been frozen, by the United States and others, because this leaves the Taliban with no access to dollars or foreign exchange to buy food or import oil.

The US has frozen nearly $9.5 billion in assets belonging to the Afghan central bank and stopped shipments of cash to the nation.

On Friday, US Treasury said it will not ease sanctions on Taliban or loosen restrictions on its access to global financial system.

The Taliban swiftly captured territory in Afghanistan in the final days of last month's withdrawal of US forces at the end of America's 20-year war, prompting some Afghans to blame neighbouring Pakistan for the insurgents' success in taking control of their country.

They pointed to the Taliban's use of Pakistani territory in multiple ways, including allowing its leaders and their families in the country, and providing treatment to its wounded fighters.

Analysts say Pakistan's leverage over the Taliban is often overstated and Akram agreed.

He called his country's influence "exaggerated" though he said Pakistan has "a fairly relaxed policy" toward the three million Afghan refugees on its soil.

"We know better than others that you cannot force the Afghans to do anything, and I think the experience of the last 40 years has indicated that nobody actually from the outside can dictate to the Afghans," he said.

"So, persuasion, yes. Talks with them, consultations, yes. But it's very difficult to persuade the Afghans."

Pakistan initially brought the Taliban to the negotiating table to get them to stop the onslaught and go back to talks.

Akram said Pakistan's prime minister and army chief went to Kabul to talk to former Afghan president Ashraf Ghani and his government and invited the leadership to Pakistan, but Ghani "remained intransigent about reaching a political settlement with the Taliban" and the Taliban also had "a very strong" position against negotiations, he said.

'Listen to a sincere friend'

With the Taliban now in control of the country, Akram said Pakistan hopes its leaders "will listen to a sincere friend in trying to form an inclusive government" whee all the ethnic groups and minorities including Tajiks, Hazaras and Shia Muslims are represented.

Under the Taliban's previous rule from 1996 to 2001, women were not allowed to go to school, work outside the home or leave their house without a male escort.

Though they faced many challenges in the country's male-dominated society after the Taliban's ouster, Afghan girls were not only educated but over the last 20 years women increasingly stepped into powerful positions in numerous fields including government, business, health and education.

Akram repeatedly stressed that "a foreign culture cannot be imposed on a people" and said "this was one of the mistakes" the United States made in Iraq and in Afghanistan.

US focused on elites in Afghan cities

After the US ouster of the Taliban following the terrorist attacks in the United States on September 11, 2001, the Pakistani ambassador said the Americans made "a fundamental mistake" by focusing on elites in the cities who benefited from the building of a modern society while ignoring the development of 70% of the Afghan population who live in rural areas and whose impoverished lives remain unchanged after 20 years.

Akram said the Taliban's support has been based very much in rural areas and villages "where the administration that was ruling in Kabul was unable to bring clear, transparent, honest governance."

Akram said the international community needs to work with the cultures that exist on the ground, to help their development so the people educate themselves and acquire knowledge of the benefits of modern societies and modern values including human rights.

He admitted this has been a struggle in Pakistan as well as India, Iran, Saudi Arabia and other countries.

READ MORE: Taliban claims it wants inclusive government, not a 'monopoly' on power 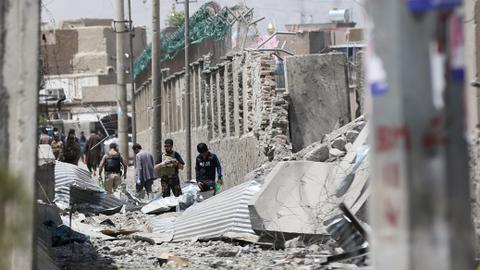 Blast at wedding in Afghan capital wounds at least 20