Tehreek-i-Taliban Pakistan accused the government of not honouring the truce and failing to release 102 of their fighters.

Taliban militants in Pakistan declared an end to a month-long ceasefire arranged with the aid of the Afghan Taliban, accusing the government of breaching terms including a prisoner release agreement and the formation of negotiating committees.

"Now let the Pakistani people decide whether it is the TTP or the Pakistani army and establishment that is not abiding by the agreements?" the group said in a statement.

"In these circumstances, it is not possible to advance the ceasefire," it said.

It said the government had not released more than 100 prisoners as promised and had not appointed negotiating teams to conduct talks.

It also said security forces had carried out raids while the ceasefire was in force.

The announcement from the group came after Pakistani authorities said they had released up to 100 Pakistani Taliban prisoners as part of a truce deal.

Pakistani Taliban are a separate group from the Afghan Taliban and have fought for years to overthrow the government in Islamabad and rule with their own brand of Islamic Sharia law.

Last month's ceasefire, which was always set to run until Thursday with the possibility of extending if both parties agreed, was the latest in a series of attempts to broker a settlement to end a conflict that has killed thousands.

The Afghan Taliban's shock overthrow of the Western-backed government in August gave the talks fresh impetus.

Pakistani Prime Minister Imran Khan announced in October that the government was in talks with the TTP for the first time since 2014, facilitated by Afghanistan's new leaders who seized power in August.

The talks have angered many within Pakistan, who remember the brutal attacks – including on schools, hotels, churches and markets – which killed around 70,000 people, according to successive governments.

Thousands of TTP fighters are believed to be in Afghanistan, mostly in the rugged eastern highlands neighbouring Pakistan, where they sought shelter after the 2014 crackdown.

Made up mostly of ethnic Pashtuns, like the Afghan Taliban, it carried out hundreds of suicide and bomb attacks and kidnappings across the country for years before being crushed by a massive military operation.

READ MORE: What is Pakistan offering this terrorist group in return for peace? 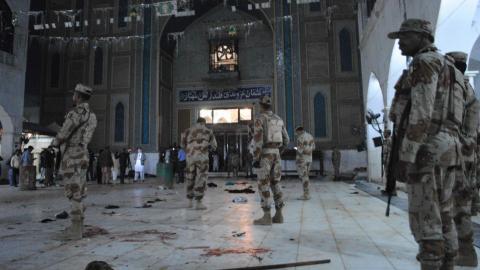