The focus is now on the eight remaining members of the football team and their coach, whom divers hope to bring out after rescuing four boys on Sunday.

Divers who extracted four Thai boys from a cave, resumed the rescue operation on Monday for eight remaining schoolboys and their football coach trapped in a waterlogged cave in northern Chiang Rai province, a senior official said.

Paojinda said officials met Monday morning to discuss the next stage of the operation and how to extract the remaining nine people from the flooded cave.

Anupong said divers need to place more air canisters along the underwater route, adding, that part of the process could take several hours.

TRT World's John Joe Regan has the latest from Thailand.

It was not immediately clear on Monday whether more rain overnight had affected water levels inside the cave.

Officials have said storms forecast for the province had factored into their decision to go ahead with a complicated and dangerous plan to have the boys and their coach dive out of the cave.

The boys, aged between 11 and 16, went missing with their 25-year-old coach after football practice on June 23. They had gone on an adventure to explore the cave complex near the border with Myanmar and celebrate a boy’s birthday.

On Sunday, four of the boys were extracted in a difficult mission involving 13 foreign divers and five members of Thailand’s navy SEAL unit.

TRT World's John Joe Regan said the rescued boys – who remained in the cave without food for nine days – are weak "but they are doing well."

Meanwhile, Thailand's weather department said there was a 60 percent chance of rain on Monday with thunderstorms forecast throughout the week.

Authorities said the next phase could begin any time within a 10-hour window that began about 0000 GMT  (7am local time) on Monday. 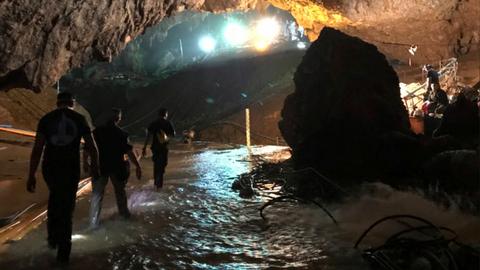 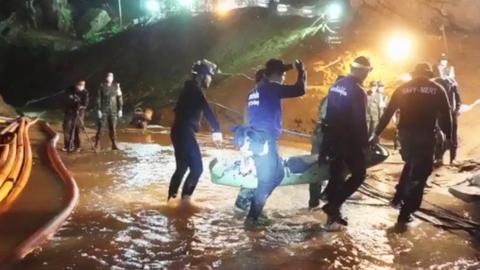