Scores killed in Bangladesh as factory fire rages in Dhaka

More than 50 people killed in Bangladesh capital in a blaze that broke out in a food factory on Thursday and continues to burn nearly 24 hours later despite firefighters’ efforts.

At least 52 people have been killed after a fire tore through a food factory on the outskirts of Bangladesh’s capital Dhaka, police have said.

The blaze that broke out in the factory in Rupganj on Thursday afternoon was still burning nearly 24 hours later as firefighters continued to battle the flames on Friday.

A fire service official, Russel Shikder, confirmed that a fire began Thursday night at the five-story Hashem Food and Beverage Ltd. factory in Rupganj, just outside Dhaka. He said additional details were not yet clear.

Ekattor TV quoted an unidentified senior fire official as saying on Friday that at least 49 people had died. It said rescuers were trying to recover the bodies from the burned factory, which was locked from the inside when the fire began, and had recovered 17 bodies so far.

Details of the cause of the fire, how many people were inside the factory and how many were missing were not immediately available.

At least two killed in a deadly fire broke out at locally popular Sezan juice factory in central Bangladesh. Kins claim dozens still remain missing as firefighters have been trying for hours to control the fire. pic.twitter.com/1TlodNIEyp

Police initially gave a toll of three dead but it rose dramatically as firefighters reached the upper floors and started bringing out dozens of bodies of trapped workers.

The charred victims were piled in a fleet of ambulances to take them to mortuaries amid anguished shouts and tears from people watching in the streets.

Police dispersed hundreds of people who blocked nearby roads and clashed with officers.

Some of the more than 30 people injured jumped from the upper floors as flames quickly engulfed the six-storey building, police inspector Sheikh Kabirul Islam said.

Emergency services were battling to put out the fire on the fifth and sixth floors. Firefighters rescued 25 people from the roof of the factory that made noodles fruit juices and candy were made.

"Once the fire is under control, we will conduct a search and rescue operation inside. Then we can confirm any further casualties, if any," Debashish Bardhan, fire service spokesman, told AFP.

Dinu Moni Sharma, head of the Dhaka fire department, said the fire took off because highly flammable chemicals and plastics had been stockpiled inside.

Mohammad Saiful, a factory worker who escaped, said dozens of people were inside when the blaze erupted.

"On the third floor, gates on both stairwells were closed. Other colleagues are saying there were 48 people inside. I don't know what happened to them," he said.

Mamun, another worker, said he and 13 other workers ran to the roof after the fire broke out on the ground floor and black smoke quickly choked the whole factory.

"Firefighters brought us down by using rope," he told reporters.

As clouds of smoke billowed from the factory building, many of the waiting relatives said they feared the worst.

Nazrul Islam said: "We came here because my niece was not receiving our phone calls for a while. And now the phone is not ringing at all. We are worried." 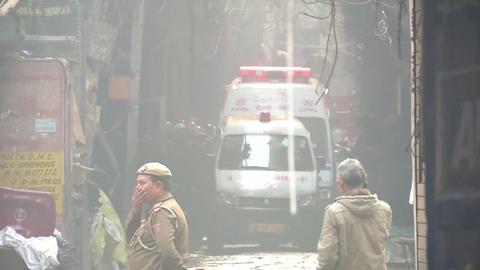