The island has been in crisis since President Maithripala Sirisena replaced Prime Minister Ranil Wickremesinghe with Rajapaksa in October, and then issued an order dissolving parliament and called for a general election.

A Sri Lankan court on Tuesday issued an order preventing Mahinda Rajapaksa from as acting as prime minister and holding cabinet meetings, the latest twist to a political drama gripping the South Asian country.

The island has been in crisis since President Maithripala Sirisena replaced Prime Minister Ranil Wickremesinghe with Rajapaksa in October, and then issued an order dissolving parliament and called for a general election.

Sirisena's decisions have prompted legal challenges and on Friday the Appeal Court began a hearing a petition signed by 122 legislators that challenges Rajapaksa's authority to hold office after he lost two no-confidence votes last month.

Rajapaksa and his cabinet ministers have been asked to appear in court on December 12, the judge added.

A spokesman for Rajapaksa was not immediately available for comment.

The decision will put a further brake on Rajapaksa's disputed government after parliament voted last week to halt payment of ministers' salaries and travel expenses.

The impasse has pushed the island's currency to record lows, caused turmoil on its stock and bond markets and raised fears it may not be able to service debts to finance reconstruction following a 26-year civil war that ended in 2009.

But Surasena said the legitimacy of the Rajapaksa government had to be determined first.

The Supreme Court is separately hearing a petition on whether Sirisena's decision to dissolve parliament was constitutional and is expected to give its verdict on Friday. 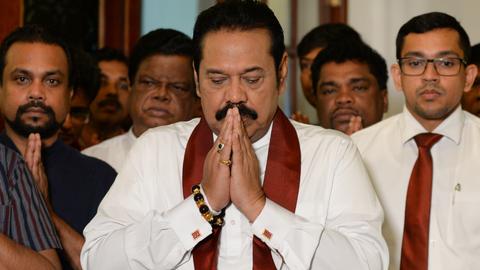