President Maithripala Sirisena says the new inquiry commission has wide judicial powers to gather evidence on those responsible for the bombings, and to probe security and intelligence lapses.

A fresh inquiry into the Easter suicide bombings that hit Sri Lanka killing at least 258 people was ordered by president Maithripala Sirisena on Sunday, after concerns from the Catholic Church that current probes are not independent.

The government has blamed a local militant group, the National Thowheeth Jama'ath (NTJ) for the April 21 attacks on three churches and three luxury hotels, while Daesh also claimed responsibility.

Sirisena said the commission has wide judicial powers to gather evidence on those responsible for the bombings, and to probe security and intelligence lapses.

The five-member panel is headed by a Court of Appeal judge and includes three other judges and a retired civil servant. It is to report back with recommendations within three months.

The inquiry was launched amid fears voiced by the country's Catholic Church that a parliamentary probe and police investigation into the attacks are not sufficiently independent.

While the newly-launched inquiry is being carried out by a cross-section of MPs, many opposition members are boycotting it. They say the commission is being used by political parties to deflect any responsibility for failing to stop the attacks.

Sirisena, who is also the minister in charge of law and order, has said that all those responsible for the attacks were either killed or under arrest.

The president has also been accused of failing to act on precise Indian intelligence that jihadists were about to hit Christian churches and other targets in Sri Lanka.

Sirisena has denied the accusations, and sacked his top defence official and the intelligence chief after blaming them for the lapses. 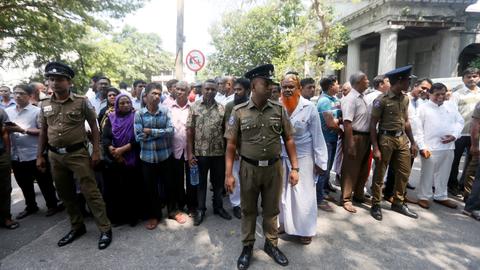