Second powerful typhoon to slam Japan in a week unleashes fierce winds and rain on southern islands, blowing off rooftops and leaving homes without power as it edged northward into an area vulnerable to flooding and mudslides.

Authorities urged early evacuation for more than 100,000 households in the southern prefectures of Okinawa, Kagoshima, Kumamoto, and Nagasaki, according to the Fire and Disaster Management Agency (FDMA).

Prime Minister Shinzo Abe with relevant cabinet ministers at 0700 GMT to discuss the emergency response to the typhoon, his office said.

Elderly citizens wearing face masks due to the coronavirus outbreak were slowly gathering at evacuation centres in Kagoshima and other parts of southern Japan, footage on national broadcaster NHK showed.

Lashing it down here on Amami Oshima as #typhoon #Haishen closes in pic.twitter.com/2vytxmJagB

The typhoon has cut power to more than 3,000 homes in Okinawa, the southernmost island prefecture, and more than 8,000 homes in Amamioshima, according to national broadcaster NHK.

Two injuries have been reported, according to the FDMA, but authorities were advising the highest levels of caution for a typhoon.

"Areas where the typhoon passes are expected to see record-high winds and waves," a meteorological official told a nationally televised news conference on Sunday.

"I am urging everyone to take the utmost caution, follow local authorities' instructions, and protect your own life. Once you enter an area of high wind, you may not be able to move to a safer place."

The typhoon is forecast to have atmospheric pressure of 935 hectopascals at its centre, and sustained winds of up to 234 km per hour by Monday, the meteorological agency said.

The typhoon's centre was near Yakushima, an island around 100 km south of Kagoshima city, on Sunday, moving northwest at 30 kph.

The typhoon was forecast to approach the Goto Islands west of Nagasaki around midnight and then move to the Korean peninsula on Monday, according to Japan's meteorological agency.

Japan's coastguard on Saturday suspended its search for crew missing from a cattle ship that capsized in the East China Sea for a second day because of the typhoon.

Typhoon Haishen follows Typhoon Maysak, which smashed into the Korean peninsula on Thursday, leaving at least two dead and thousands temporarily without power.

North Korean leader Kim Jong Un has ordered 12,000 elite members of his ruling party based in Pyongyang to help with recovery efforts in two rural provinces lashed by a powerful typhoon, state media reported on Sunday.

More than 1,000 homes were destroyed by Maysak and public buildings and farmland were inundated with floodwater across North and South Hamgyong provinces, the official KCNA news agency reported.

He also dismissed the chairman of the South Hamgyong provincial party committee, the report added.

Photos carried by Sunday's official Rodong Sinmun newspaper showed Kim standing in front of destroyed homes and toppled trees as he discussed the situation with officials.

The damage was an "urgent situation which needs to be tackled without even a moment's delay", he added. 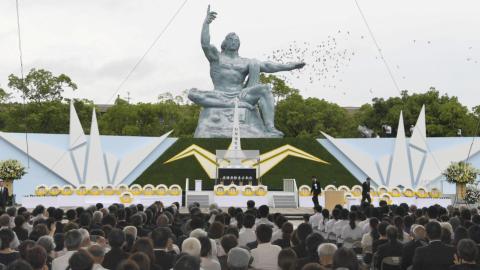