Thailand will hold a much-delayed general election on February 24, 2019, nearly five years after a military junta took power in a coup and imposed a ban on political activity.

In preparation for elections slated for next year, Thailand's military government has lifted the ban on political activities that it first imposed when it seized power in a coup five years ago.

The electoral race early next year is expected to pit former prime minister Thaksin's red shirt followers against the military and royalist establishment, which has its own proxy political parties.

The military is entwined with the powerful monarchy - supporters of this powerful coalition are dubbed yellow shirts, for the colour of royalty.

Thailand has been bitterly divided since a 2006 coup against Thaksin, a billionaire businessman turned politician who gained the adoration of rural voters through populist schemes but made many enemies among the military-royalist elite.

After the restoration of democracy in 2011, the military again intervened in 2014 to topple a civilian government led by Thaksin’s sister Yingluck Shinawatra.

How common are coups in Thailand?

Thailand’s political history has been pockmarked with coups - since the end of direct rule by kings in 1932, it has undergone 12 military takeovers. The 2014 coup was partly the military’s attempt to address what they call the mistakes of the 2006 coup, including a failure to get rid of Thaksin’s allies and subdue his supporters, political analysts say.

But since then the junta has been under pressure from some Western countries such as the US, Germany and Britain, to return to democracy after repeated delays to the general election - the one that is now scheduled for February 24 next year.

How has life in Thailand been since 2014?

Since the military government came into power, 358 orders have been issued by them in an attempt to impose discipline on every aspect of Thai public life. They ranged from making seat belts mandatory for passengers in the backseats of cars to holding parents accountable for student fights.

The junta has also launched disciplinary initiatives such as a hotline to deal with misbehaving Buddhist monks and so-called ‘attitude adjustment’ programs for drunk drivers. The campaign has also covered everything from a crackdown on taxi gangs at airports to a clean-up of street food stalls, the latter with mostly mixed results.

Army spokesman Winthai Suvaree said those efforts by the junta, formally known as the National Council for Peace and Order (NCPO), have improved Thailand.

“Overall, people are satisfied with concrete changes in the society,” Winthai said.

The public certainly does not appear too concerned. The government says military recruitment numbers doubled in 2017 compared to the previous year and attribute that to public approval of their hard-line tactics in breaking a political impasse that had persisted for years.

As the ban on political work has been lifted, many expect the return of Thailand's rambunctious political campaigning and street rallies that have defined much of the turbulent last decade of Thai politics.

"The lifting of the ban means political activities can resume, including political campaigning, but this has to be done under the law," Deputy Election Commission Secretary-General Sawang Boonmee told Reuters.

Prayuth, the ex-army chief who led the coup, has shown signs of wanting to stay in power after next year’s vote, touring the countryside to meet people in what critics say is his bid to continue in the job.

A military-aligned political party has built wide alliances, even scooping up defectors from rivals including Pheu Thai, the Shinawatra-backed party dumped from office in the 2014 coup.

"I'd like to congratulate the Thai people as today is the start of a new hope we'll get freedom and equality back," Thaksin said in a rare Facebook post responding to the lifting of the campaigning ban.
He also called for the constitution to be changed in a post accompanied by a photo of him making the three-fingered salute from The Hunger Games movie franchise, an unofficial emblem of defiance of Thailand's ruling junta.

Thailand's anti-military parties say they have seats to form government 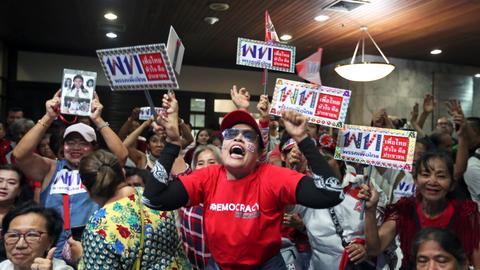 Thai elections: a struggle between democracy and the military