Chinese firms have so far invested more than $20 billion in non-financial direct investment on projects in Belt and Road Initiative countries in 2021.

China has welcomed Argentina into its global Belt and Road Initiative as President Xi Jinping capped a weekend of frenetic diplomatic activity on the sidelines of the Winter Olympics.

China and Argentina have inked an agreement on "jointly promoting the construction of the Silk Road Economic Belt and 21st Century Maritime Silk Road", marking Argentina's entry into the initiative, state broadcaster CCTV reported on Sunday.

China's BRI is a trillion-dollar push to improve trade links across the globe by building landmark infrastructure, and the inclusion of Argentina is a major win for Beijing in Latin America.

Chinese companies invested more than $20 billion in non-financial direct investment on projects in BRI countries in 2021, according to China's commerce ministry.

The deal came as Argentine President Alberto Fernandez made a three-day visit to China during which both sides also said they would continue to support each other on issues concerning sovereign interests.

READ MORE: How China solidified its foothold in Latin America through a space centre

China has invested significantly in the region where separatists have waged an insurgency for years, fuelled by anger that its abundant reserves of natural resources are not relieving citizens from crushing poverty.

During the meeting, Xi stressed that "the Chinese side firmly supports Pakistan in safeguarding its national independence, sovereignty and dignity, as well as in combating terrorism", according to state media.

He added that China is willing to work with Pakistan in "aligning development strategies".

Xi has not left his country since the coronavirus first emerged in the city of Wuhan, with China now the only major economy still pursuing a strict zero-Covid strategy.

But the Beijing Games have allowed Xi to hold a flurry of face-to-face meetings with those world leaders for the first time in nearly two years.

His most significant meeting took place on Friday when Xi held talks with Russia's Vladimir Putin just before the opening ceremony of the Olympics. 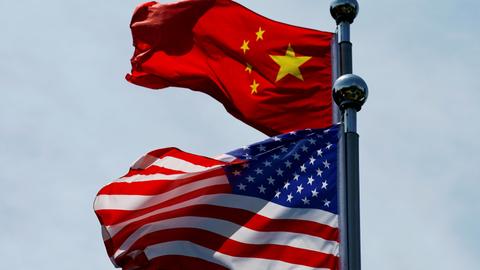