Chinese blue-chip shares, in contrast, dropped 0.21 percent after the data showed profits at China's industrial firms declined in annual terms for the third consecutive month in October. The decline tracked sustained drops in producer prices and exports and underscored slowing momentum in the world's second-largest economy.

US and China to agree on first phase of trade deal

Trump said on Tuesday the US and China are close to an agreement on the first phase of a trade deal after top negotiators from the two countries spoke by telephone and agreed to keep working on remaining issues.

The positive mood pushed Wall Street indexes to fresh record closing highs on Tuesday. But while Trump said Washington was in the "final throes" of work on a trade deal with Beijing, he also underscored US support for protesters in Hong Kong, seen as a sore point for Beijing.

Trump's comments came alongside softer-than-expected economic data from the US, which showed a fourth straight monthly contraction in consumer confidence and an unexpected drop in new home sales in October.

However, consumer confidence still remained at levels able to support steady consumer spending and the housing data for September was revised up, with purchases touching more than 12-year highs.

Kay Van-Petersen, global macro strategist at Saxo Capital Markets in Singapore, said while US-China trade headlines may be driving some tactical, near-term moves in the market, they were mostly just "noise".

The broader market direction is "about the accommodative Fed and accommodative monetary policy and the fact that structurally the meta-trend is still lower in yields and rates", he said.

Some analysts said a fall in US bond yields on Tuesday also pointed to more mechanical explanations beyond trade for rising equity prices.

"It reinforces the notion that it really is the Fed pump-priming to grease the wheels of market liquidity, which is driving both these moves," Greg McKenna, strategist at McKenna Macro, said in a morning note.

On Wednesday, the rally in US treasuries moderated across the curve, with benchmark 10-year notes yielding 1.7431 percent, up from their US close of 1.74 percent on Tuesday.

The two-year yield, watched as a guide to market expectations of Fed policy, rose to almost 1.6 percent compared with a US close of 1.586 percent.

The dollar index, which tracks the greenback against a basket of six major rivals, was up 0.09 percent at 98.341.

Oil prices retreated after rising Tuesday on reassuring trade headlines. US West Texas Intermediate crude was down 0.21 percent at $58.29 per barrel. 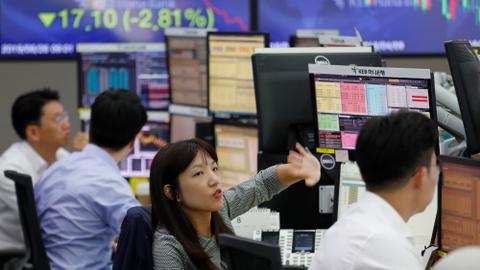