Irish budget airline has suddenly announced that it is cancelling 2000 flights to cope with pilot shortages.

The EU on Monday warned Ryanair it must "fully comply" with rules on compensating passengers after the no-frills carrier suddenly announced it was scrapping 2,000 flights in what it called a bid to improve punctuality.

European Union Transport Commissioner Violeta Bulc said Brussels was in contact with the Dublin-based airline, adding to pressure on Ryanair from passengers, consumer groups and a British government minister.

"All passengers whose flights are cancelled have a comprehensive set of rights under EU law.

"We are in contact with Ryanair, and we expect them to fully comply with those rights. National authorities are responsible for their enforcement."

Ryanair said that it was preparing for up to 20 million euros ($23.9 million) in compensation claims after the cancellations, but analysts estimated that the total cost could be higher.

Ryanair blamed a number of factors for the sudden cancellations including a backlog of staff leave, which must be taken by the end of the year. Europe's largest airline by passenger numbers also said air traffic control strikes and weather disruption were affecting its performance.

Rival Norwegian Air said on Monday that it had recruited more than 140 pilots from Ryanair this year, adding to the squeeze on staffing.

"It is clearly a mess but in the context of an operation where we operate more than 2,500 flights every day, it is reasonably small but that doesn't take away the inconvenience we've caused to people," Ryanair Chief Executive Michael O'Leary told Sky News.

He said the problems were not the result of pilots quitting but was "because we're giving pilots lots of holidays over the next four months." Every passenger who is entitled to compensation will receive it in full, he added.

Seeking to halt a decline in performance figures, Ryanair has taken the unusual step of announcing plans to cancel between 40 and 50 flights per day until the end of October.

Ryanair said the cancellations were designed "to improve its system-wide punctuality which has fallen below 80 percent in the first two weeks of September."

While it currently calculates crew leave from April to March, the Irish Aviation Authority is forcing it to calculate it from January to December from the start of 2018, it added.

Ryanair sent emails to the first affected passengers last Friday, giving them the choice of a refund or an alternative flight. It has issued cancellation notices up until Wednesday.

The move brought bad publicity for an airline which has worked hard over the past few years to improve a reputation for treating passengers badly.

News bulletins in Ireland ran interviews with disgruntled customers while newspapers asked readers to share their stories, including a wedding party who told the Irish Times they had been left stranded in France.

Goodbody said that would shave 2.3 percent off its full year forecast of 1.479 billion euros in profit after tax.

Barring exceptional circumstances, airlines must under EU rules provide at least two weeks' notice to avoid paying compensation of 250 euros per passenger for flights of 1,500 km or less or 400 euros for longer flights within the bloc.

The fall in Ryanair's punctuality below 80 percent compared to an average of 89 percent in the three months to the end of June. O'Leary said at the time he was not happy with that figure, seeking a mark of over 90 percent.

The Irish Independent reported on Monday that Ryanair has been offering pilots a 10,000 euro ($11,925) "signing-on bonus" in response to recruitment problems.

Ryanair employed 4,058 pilots at the end of March, according to its annual report, up from 3,424 a year earlier to keep up with a rapid growth in passenger numbers.

Training company CAE Inc warned recently that the worldwide commercial aviation industry will need an extra 255,000 pilots by 2027 to sustain its rapid growth and is not moving fast enough to fill the positions.

Shares in Ryanair, which fell by more than 3 percent in early trading, were 1.85 percent lower at 1430 GMT. 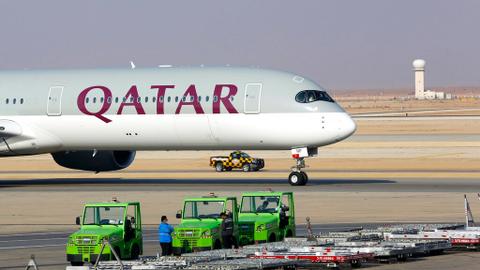