Units of the cryptocurrency NEM worth $530 million were stolen on Friday. Singapore-based NEM says its blockchain is tracking the stolen coins and that the hacker has not attempted to move them, but that it has no way to return them to their owners.

Japan on Monday imposed administrative measures on virtual currency exchange Coincheck after hackers stole hundreds of millions of dollars in digital assets from the Tokyo-based firm in one of the biggest heists ever.

Units of the cryptocurrency NEM worth $530 million were taken — based on the exchange rate on Friday — exceeding even the $480 million in bitcoin stolen from the MtGox exchange in 2014.

Coincheck suspended trading of all cryptocurrencies except bitcoin on Friday, and said it had lost 523 million units of NEM, the 10th biggest cryptocurrency in the world based on market capitalisation.

The Financial Services Agency (FSA) said in a statement that it had ordered Coincheck to investigate the cause of the incident, "properly" deal with clients, strengthen risk management and take preventive measures.

The financial watchdog told the exchange to respond to the orders by February 13, warning that the agency would raid its office if necessary.

The company said it would reimburse customers in yen, not cryptocurrency.

The FSA said at a briefing Monday that it was checking to ensure Coincheck had the ability to make those refunds.

The watchdog added that it was carrying out checks at other exchanges in the wake of the theft to detect potential security problems.

The agency will supervise Coincheck to ensure the measures are being implemented and contracts are being honoured, Chief Cabinet Secretary Yoshihide Suga said at a regular briefing.

"While examining the cause of the incident and taking necessary measures, we want the ministries and agencies concerned to urgently study what further measures we'd need," the top government spokesman said.

Coincheck "did not store the important things separately. I think they lacked fundamental knowledge or common sense," he said.

One unit of NEM was trading at 95 cents at around 0730 GMT on Monday, according to coinmarketcap.com.

Japan is a leading market for cryptocurrencies, with nearly one third of global bitcoin transactions in December denominated in yen, according to specialist website jpbitcoin.com.

As many as 10,000 businesses in Japan are thought to accept bitcoin, and bitFlyer — the country's main bitcoin exchange — saw its user base grow beyond one million in November.

Many Japanese, especially younger investors, have been seduced by the idea of strong profits as the economy has seen years of ultra-low interest rates offering little in the way of traditional returns.

In the wake of the MtGox scandal, Japan passed a law on cryptocurrencies that requires exchanges to be regulated by the FSA.

Coincheck had submitted an application to the FSA for a licence and was allowed to continue operating while it awaited a decision, the agency said.

Singapore-based NEM Foundation said it had a tracing system on the NEM blockchain and that it had "a full account" of all of Coincheck's lost NEM coins. It added that the hacker had not moved any of the funds to any exchange or personal accounts but that it had no way to return the stolen funds to its owners.

World leaders meeting in Davos last week issued fresh warnings about the dangers of cryptocurrencies, with US Treasury Secretary Steven Mnuchin relating Washington's concern about the money being used for illicit activity.

Japan's top financial diplomat said regulation of cryptocurrencies would likely be on the agenda at the G20 finance chiefs' meeting in Argentina in March.

South Korea will this week ban cryptocurrency traders from using anonymous bank accounts to crack down on the criminal use of virtual coins. China, worried about financial risks from such trading, has ordered some exchanges in Beijing to close. 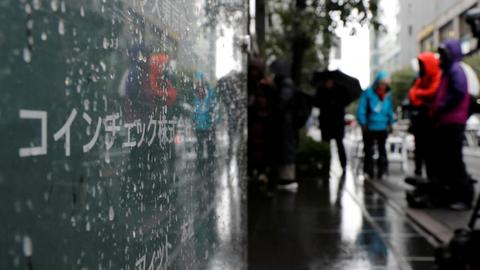