Democratic Republic of Congo opposes Canada’s Barrick Gold to have stake in the Kibali mine owned by the state as a result of the acquisition of Randgold Resources.

Randgold Resources Ltd has run into opposition from the Democratic Republic of Congo's government, which is insisting that it authorise the acquisition by Canada's Barrick Gold Corp of Randgold's stake in a Congolese gold mine.

Barrick agreed to buy Randgold this week in a deal to create the world's largest gold company with an aggregate market valuation of $18.3 billion.

As a result of the takeover, Barrick will become the owner of Randgold's 45 percent stake in the Kibali mine in Congo but Congolese Mines Minister Martin Kabwelulu said the shareholder change would need to be approved by the government in accordance with Congo's new mining code.

The ministry's statement backs the position taken earlier in the day by state miner Sokimo, which owns a 10 percent stake in the mine and vowed to "assert its rights" regarding the takeover. AngloGold Ashanti owns the other 45 percent stake in the project, one of Africa's biggest gold mines.

Sokimo said the transaction represented an effort by the foreign companies "to impose themselves, without any prior discussion, in the countries from which the resources that make up their wealth are extracted".

Randgold said that the takeover would not introduce a new partner in the Kibali project, as suggested by Sokimo.

"There are no provisions in the joint venture agreement and the related documentation which give Sokimo any rights resulting from the proposed merger," Randgold said.

Randgold, which has fallen out with the Congolese authorities this year over the new mining code that hikes taxes and cancels exemptions, said it had consulted with Sokimo, the minister of mines and other parties, in the days following the merger announcement.

Congo has earned hundreds of millions of dollars in payouts from international miners in similar instances in the past few years.

The same language Sokimo used about asserting rights was echoed by another Congolese state miner, Gecamines, against Freeport, when in 2016 it announced the sale of its stake in the Tenke copper mine to China Molybdenum. Gecamines received $100 million in a settlement.

Meanwhile, Gecamines in June agreed to drop legal proceedings to dissolve a joint venture with a subsidiary of Glencore after reaching a settlement that included Gecamines getting a $150 million payment.

Randgold has a stake in several projects in Congo, including the Kibali mine. 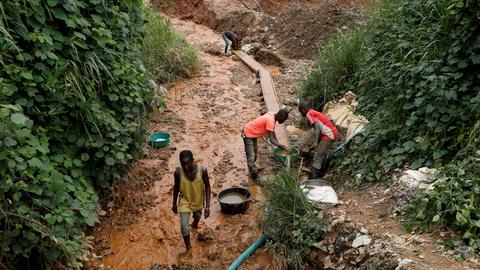