Research is increasingly pointing to a retreat of working mothers from the US labour force as the pandemic leaves parents with few child care options and the added burden of navigating distance learning.

Angela Wynn had just launched her own project management business, hitting a career stride after years of struggle that began with earning an undergraduate degree as a single mother.

Then the coronavirus pandemic hit, forcing many schools to shift online. The now-married mother of five saw little choice but to give up her newly minted business to help three of her children cope with remote learning while her husband, the primary breadwinner, kept his job at a senior living centre.

“To see all that come to fruition, I did it, but now it’s gone,” said Wynn, who has always been the main caretaker for her children, ages 1, 5, 11, 12 and 18. “But my priority is my kids and their education is everything.”

Wynn’s story is becoming distressingly common. Research is increasingly pointing to a retreat of working mothers from the US labour force as the pandemic leaves parents with few child care options and the added burden of navigating distance learning.

The trend threatens the financial stability of families in the near-term. In the long-term, the crisis could stall, if not reverse, decades of hard-fought gains by working women who are still far from achieving labour force parity with men.

Thousands of school districts are starting the school year with remote instruction, including most of the largest ones.

At least half the country's child care providers are closed and may not survive the crisis without financial help to cope with implementing safety standards and reduced enrollment. Negotiations for a bailout of the industry have stalled in Congress.

In August, the federal jobs reports showed that women in their prime-earning years (25 to 54) were dropping out of the work force more than other age groups. About 77 percent of women in that age group were working or looking for work in February, compared to 74.9 percent in August.

Overall, the drop translates into 1.3 million women exiting the labour force since February.

“We think this reflects the growing child care crisis,” BNP Paribas economists Daniel Ahn and Steven Weinberg wrote in recent report. “It is hard to see this abating soon, and if anything could become worse as we move into fall.”

Few families can afford for mothers not to work indefinitely: Mothers are now are the equal, primary, or sole earners in 40 percent of US families, up from 11 percent in 1960, according to federal labour figures.

Women also comprise nearly half the US labour force, making their inability to work a significant drag on the economy and hindering any recovery from the pandemic's impact.

In Wynn's case, she is working a part-time job to help pay the bills. Even so, the family is taking a financial hit, refinancing their home outside Nashville and starting a garden in their backyard to cut down on grocery bills.

Despite the leaps over the past decades, working women still entered the pandemic at a disadvantage. They are typically paid 82 cents for every dollar men earn, according to research by the National Women’s Law Center.

Among working mothers and fathers, the wage gap is even higher at 70 cents. The median household earnings for mothers in the US is $42,000, compared to $60,000 for fathers.

When left with no choice but to give up one income as child care options collapse, that wage gap incentivises fathers to stay in the workforce and mothers to leave, or at least scale back.

“There is already a motherhood wage gap. In times of uncertainty and recession, you protect the primary earner," said Liana Christin Landivar, a sociologist at the Maryland Population Research Center and author of the book, “Mothers at Work: Who Opts Out?”

READ MORE: It's 2017 and some men still think women should earn less

That is bearing out in the numbers. More mothers than fathers have exited the labour force since the pandemic began, according to research published in August by Sage Journals, which analysed data from the Current Population Survey.

Between February and April, labour force participation fell 3.2 percent among mothers with children younger than 6, and 4.3 percent for those with children 6 to 12. Fathers of children under 12 also left the workforce, but at lower rates, said Landivar, who co-authored the report.

In a separate study, the same researchers found mothers are cutting back on working hours more than fathers. Mothers of children under 12 were working more than six fewer hours a week than fathers in April, compared to less than five fewer hours in February, according to the study, which looked at sub-sample of heterosexual married men and women from the CPS, a monthly survey of 60,000 households sponsored by the US Census Bureau and the Bureau of Labor Statistics.

“We already knew there was a large gender inequality in the labour force, and the pandemic just makes this worse,” Landivar said.

For Anna Hamilton and her husband, juggling two careers while raising two children was always a bit of house of cards. The pandemic knocked it down, at least for now.

Hamilton, who lives in the Atlanta area, is taking indefinite leave from her job at a small investment firm, a job she stuck with for 12 years in part because it allowed her family to move twice so her husband could pursue his career as a cancer surgeon.

She has mixed feelings but one thing she knows is that working full-time while handling remote schooling last spring was unbearable.

“There was a lot yelling. I thought, ‘let’s just admit what’s happening and maybe everyone will be happier,’” said Hamilton, 43, whose sons are 6 and 7. “I hope it’s not a career-ender.”

Concerned about attrition and loss of productivity, some companies are now rolling out generous benefits to help working parents cope with school and day care closures because of the pandemic. Microsoft is offering an extra 12 weeks of paid family leave for employees struggling with child care issues. Google added 14 more weeks.

“Our CEO has talked to other tech CEOs who said they’re starting to see attrition tick up, especially with female employees. They thought it had to do with the parenting load,” said Christine Rogers-Raetsch, vice president of people at Duolingo. “We set a directional goal for ourselves: Let’s not lose any parents during this.”

But most women don't work for tech companies, and instead make up a majority of the country's teachers, nurses, child care workers, social workers, librarians, bookkeepers, waitresses, cashiers and housekeepers, according to federal labour figures.

Mothers in particular are the majority of the country's teachers, nurses and child care workers. Despite the progress over the past two years, 80 percent of US private sector workers have no access to paid family leave, which is not mandated by federal law.

“When we leave it to employers, the vast majority of higher income workers get more coverage and low-income workers just don't. This disproportionately affects women,” Landivar said.

The pandemic has particularly affected women who put their careers on the back burner with the expectation of ramping back up once their children reached school age.

With the youngest of her three children now 6 years old, Kate Albrecht Fidler had begun studying for certification as a human resources professional, hoping to jumpstart a career she had largely put on hold.

But in April, the 49-year-old was furloughed from her part-time job at a hospital and now she’s once again looking for any flexible job she can get because she’ll have to shepherd her children through remote schooling in her rural town of Adams, New York.

“For women in their prime earning years, this is a complete disaster,” Albrecht Fidler said. "There’s no way to catch up." 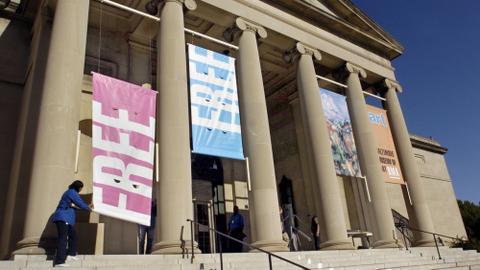 US museum targets gender gap by acquiring only works by women