Officials say there are "serious indications of arson" at a resort near Athens that sparked a wildfire, killing at least 82 people. But experts warn the gutted town had been built like a "fire trap," with few escape routes.

Greek authorities said on Thursday there were serious indications that a deadly wildfire that gutted a vacation resort near Athens was started deliberately, while experts warned that the devastated coastal town had been built like a "fire trap," with poor safety standards and few escape routes.

The death toll from Monday's blaze east of the Greek capital rose to 82 as rescuers and divers continued to search for more bodies in burnt-out homes and at sea, where hundreds fled to try to escape the inferno.

Public Order Minister Nikos Toskas said satellite image analysis of the deadly fire and a second blaze that broke out Monday on the other side of the city indicated both had been set in multiple places within a short time frame.

"We have serious indications and significant findings of criminal activity concerning arson," Toskas said. "We are troubled by many factors, and there have been physical findings that are the subject of an investigation."

He declined to provide more details.

Monday night's blaze turned the small town of Mati east of Athens into a wasteland of death and destruction.

In one of the worst Greek disasters in living memory, the blaze trapped dozens of people in their cars trying to flee a barrelling wall of flames.

With the toll expected to rise further, about 300 firemen and volunteers were still combing the area on Thursday for dozens still missing.

In a nation numbed by the scale of devastation, desperate relatives appeared on television to plead for information on those missing, while questions mounted on how people got trapped, and why no evacuation order was issued.

A group of experts from the University of Athens' Faculty of Geology and Geo-environment said the layout of the resort had acted like a "fire trap" with access to the sea hampered by cliffs, and homes built in wooded areas with little provision for fire safety.

The study also noted that the resort had narrow roads, numerous dead-ends, and was poorly sign-posted, meaning visitors could not easily reach a nearby main road.

Adding to the misery, an area of Athens was hit by flash floods on Thursday, damaging scores of cars.

About 500 homes were destroyed, and the fire brigade said there were closed-up homes that had not yet been checked.

The left-led government announced a long list of relief measures including a one-off 10,000 euro payment and a job in the public sector for victims' spouses and near relatives. But for many, that was not enough to ease the pain.

At a morgue in Athens where identification efforts were centered, relatives were informed about the steps needed to match the bodies held there to a missing person, including providing DNA samples and dental records.

"The procedure is difficult, harder than that of other mass disasters which we have dealt with in the past as a forensics department," coroner Nikolaos Kalogrias said.

"Here, the main cause of death was burning, in most cases the complete burning (of the body), so identification is very difficult." 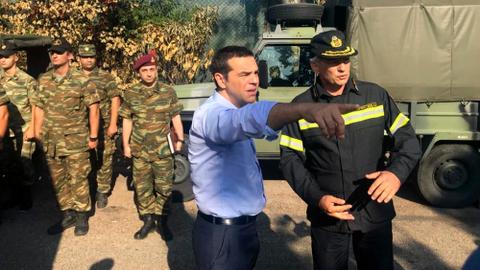