Scotland was reeling on Thursday after Alex Salmond's shock resignation from the Scottish National Party following allegations of sexual misconduct against the staunch nationalist who nearly led Scotland to independence in 2014.

He has fiercely denied the claims, which date back to 2013 when he was in office and is taking legal action against the Scottish Government over the complaints process against him.

In a video message posted on social media late on Wednesday, Salmond said he was quitting the SNP to prevent "substantial internal division" and attacks from rival political parties.

"I did not come into politics to facilitate opposition attacks on the SNP and, with parliament returning next week, I have tendered my resignation to remove this line of opposition attack," he said.

"Most of all I am conscious that if the party felt forced into suspending me it would cause substantial internal division."

First Minister and SNP leader Nicola Sturgeon had come under pressure in recent days to suspend Salmond, her political mentor over three decades.

Following his announcement, she said she felt "a huge sadness about this whole situation".

"While the decision to resign has been Alex's alone, I understand why he has chosen to separate the current questions he is facing from the day-to-day business of the SNP and the ongoing campaign for independence," Sturgeon added.

She defended her government's probe into the allegations, arguing they "could not be ignored or swept under the carpet."

"Complaints must be investigated without fear or favour, regardless of the seniority of the person involved," she said.

The case was referred to the police following an internal probe by Scottish government officials.

But Salmond claims the officials acted "unlawfully" by raising the complaint over three years after he left office, filing a legal challenge at an Edinburgh court on Tuesday.

The government has said it will "defend its position vigorously".

Alongside his resignation, Salmond also launched of a crowdfunding campaign to help with the legal costs.

Opposition parties attacked the fundraising as "astonishing" and "unbelievable".

"Scotland now faces the incredible and unprecedented situation of its most famous former first minister appealing to SNP supporters for cash to take legal action against the government he used to run," a spokesman for the Scottish Conservatives said.

Salmond said he intended to reapply for SNP membership "just as soon as I have had the opportunity to clear my name".

"I hope that is by the end of this year," he added. 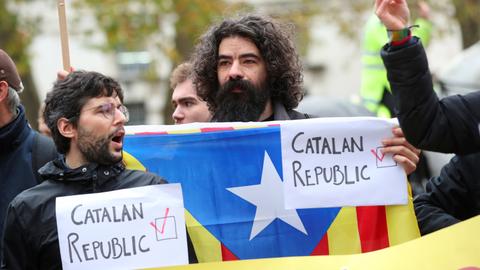