The agreement combines pledges of action against climate change, Green priorities, with moves to cut Austrians' tax burden and with the tough line on migration that Kurz has made a hallmark of his People's Party.

Austrian conservative leader Sebastian Kurz said on Thursday his party's coalition deal with the Greens, who are set to join the Alpine country's government for the first time, offers “the best of both worlds” and will allow both partners to keep central election promises.

Green leader Werner Kogler, who will become vice-chancellor if a convention of his party approves the deal on Saturday, said the alliance of once-unlikely political bedfellows could set an example for other European countries.

Kurz, 33, is set to return to power after a seven-month hiatus and reclaim the title of the world's youngest serving head of government from new Finnish Prime Minister Sanna Marin, who is 34.

The agreement combines pledges of action against climate change and of improved government and administrative transparency, Green priorities, with moves to cut Austrians' tax burden and with the tough line on migration that Kurz has made a hallmark of his People's Party.

“We didn't try to negotiate each other down to minimal compromises,” he said. “We deliberately brought together the best of both worlds, and so it is possible both for the Greens to keep their central election promises and for us.”

Kurz stressed that migrants rescued in the Mediterranean should be taken to “safe countries of origin, third countries or transit countries if they are safe.” He insisted that efforts to distribute migrants within Europe have failed.

At home, he said, there will be a ban on girls under 14 wearing headscarves in schools.

He said he wants Austria to be carbon-neutral in 2040, 10 years before the European Union's target.

He noted the prospect of the new coalition having a “role model effect” in Europe and standing for the “reconciliation of ecology and economy, embedding social security.”

The new coalition results from a snap September election in which Kurz's party emerged as by far the biggest in the national legislature and the Greens made strong gains to return to parliament after a two-year absence.

The election was triggered by the collapse in May of Kurz's previous coalition government with the far-right Freedom Party.

Parliament then ousted Kurz in a no-confidence vote. Austria has since been run by a non-partisan interim government under Chancellor Brigitte Bierlein.

Beside Kurz and Kogler, the People's Party will have 10 ministers in the new Cabinet and the Greens three. The Greens will run a ministry responsible for the environment, climate and transport; the justice ministry; and the health and social affairs ministry.

Kurz said there will be more women than men in the new team. 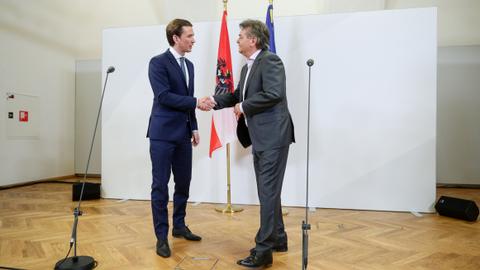