Prime Minister Boris Johnson called out his rival and Labour Party leader Jeremy Corbyn over his proposed tax policies. Corbyn dismissed the accusation and promised he only seeks power so that he can share it.

The splintered country is entering its third general election in four years to try and resolve the crisis launched by voters' decision in 2016 to break away from the European Union after nearly 50 years.

Johnson is hoping the December 12 poll will help his minority government secure the majority needed to push through his separation terms with Brussels quickly enough for Britain to finally leave by the new deadline of January 31.

But the ruling Conservatives' lead in opinion polls over Labour is similar to the one former prime minister Theresa May all-but wasted in Britain's last election in 2017.

Johnson visited Queen Elizabeth II in Buckingham Palace to ask the 93-year-old monarch to dissolve parliament and get the five-week campaign underway.

Yet election season has been informally open for months.

Johnson has spent most of his four months in office making lavish government spending promises and paying weekly visits to hospitals and schools.

He revved up his campaign further by penning a front-page piece for Wednesday's edition of The Daily Telegraph – a right-wing newspaper for which he worked for years.

"The tragedy of the modern Labour Party under Jeremy Corbyn is that they detest the profit motive so viscerally – and would raise taxes so wantonly – that they would destroy the very basis of this country's prosperity," Johnson wrote.

"They pretend that their hatred is directed only at certain billionaires – and they point their fingers at individuals with a relish and a vindictiveness not seen since Stalin persecuted the kulaks."

The kulaks were wealthier farmers that the Soviet dictator killed by the thousands during his reign of terror in the 1930s.

He later told a campaign rally in a Brexit-supporting region of northwest England that he will be "a very different kind of prime minister".

"I don't do personal attacks," he added.

The veteran socialist campaigner will be happy to cast his fight with Johnson as a traditional class struggle rather than a battle of ideas over Britain's place in Europe.

Corbyn is deeply suspicious of EU institutions and more sympathetic to Brexit supporters than most others in Labour leadership ranks.

He has had trouble formulating a Brexit position and now supports a multi-step solution that Johnson ridiculed on Tuesday as unrealistic and vague.

Labour is promising to negotiate a more EU-friendly withdrawal agreement with Brussels and then let voters decide whether to back it or simply stay in the 27-nation bloc.

But Corbyn's pledge to get everything "settled" in six months is not sitting well in Brussels.

"Honestly spoken, I don't think that this is a realistic approach," outgoing European Commission President Jean-Claude Juncker told the BBC.

Johnson's own campaign was forced into damage limitation mode on Tuesday by a foot-in-mouth moment from his ally Jacob Rees-Mogg.

The aristocratic-mannered Rees-Mogg was forced to "profoundly apologise" for suggesting that some of the 72 victims of London's 2017 Grenfell Tower inferno could have survived if they followed their "common sense" and fled for safety.

Fire brigades had instructed people to stay put and wait to be rescued.

Rees-Mogg served as the government's representative in the outgoing parliament and is a hardline Brexit supporter.

His backing could prove crucial for Johnson to see off the prospect of anti-EU populist Nigel Farage's Brexit Party gaining ground at the election.

Johnson's government was dealt a further blow Wednesday by the resignation of Welsh Secretary Alun Cairns over allegations that he hid knowledge of a former aide's role in a rape trial. 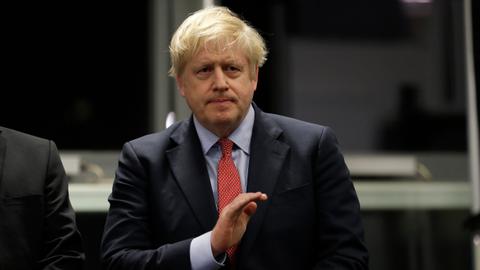