Turkish Cypriot and Greek Cypriot leaders meet for the first time since talks broke off two months ago over a controversial law passed by the Greek Cypriot assembly.

Turkish Cypriot and Greek Cypriot leaders met in the UN-controlled buffer zone that divides the Greek Cypriot administration in the south and the Turkish Republic of Northern Cyprus on Tuesday.

Talks had broken off in February after the Greek Cypriot administration pushed forward a controversial commemoration law.

Turkish Cypriot president Mustafa Akinci decided to pull out of the talks after his Greek Cypriot counterpart Nicos Anastasiades stormed out of a meeting between the two leaders when they disagreed over the proposed law.

But the reversal of the decision by the Greek Cypriots allowed negotiations to resume.

"I hope this new round of negotiations can finally bring us to the point where we could say that there's agreement," Anastasiades told reporters after the meeting.

Akinci meanwhile said the UN could help move the process forward by coming up with bridging proposals. He also ruled out prospects of a deal being reached by July, before the Greek Cypriot administration plans to begin exploratory drilling for gas off Cyprus' southern coast.

Turkish Cypriots object to such drilling because they say it disregards their right to the island's natural resources.

Akinci and Anastasiades have been involved in reunification talks to create a bizonal federal state since May 2015.

The eastern Mediterranean island has been divided since 1974 when Turkey decided to militarily intervene in response to a coup carried out by the Greek junta against the Cypriot government in July 1974. The coup aimed to annex the island to Greece.

Turkey, one of three guarantors of peace in Cyprus under a 1960 international treaty, maintains a military presence in the island's north, where Turkish Cypriots in 1983 declared independence from the internationally recognised Republic of Cyprus.

Before the two-month hiatus, the two sides had agreed on most of the issues in the reunification deal, but the sticking points, including a security and guarantees system, remain unsolved.

Turkey insists 30,000 of its troops must remain on the island as part of Ankara's role as a guarantor power. Greek Cypriots, however, have rejected this proposal.

Last week, Akinci said new talks would be a fresh beginning for both sides, but also warned no one expected Turkey to take unilateral steps in the negotiation process.

"The result can be obtained if this path is walked together," Akinci said.

Once a final agreement is reached, it would be put to both communities in a referendum. A previous UN-endorsed peace deal was approved by Turkish Cypriots in a 2004 referendum but rejected by Greek Cypriot voters. 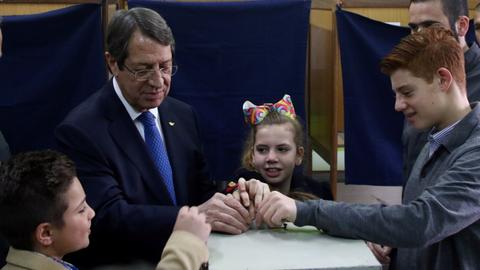