Troops from the Warsaw Pact, a military alliance formed in 1955 between the Soviet Union and seven Eastern European nations, invaded Czechoslovakia on August 20, 1968 to crush liberal reforms enacted in the brief era known as the Prague Spring.

A ceremony to honour the victims of the 1968 Soviet-led invasion of Czechoslovakia on Tuesday turned into a protest against Czech Prime Minister Andrej Babis.

Hundreds jeered and booed Babis' arrival for a ceremony in front of the Czech public radio building in downtown Prague, a site of a fierce street battle between unarmed civilians and invading troops in the first hours of occupation where 17 people died.

"Shame, shame...," the crowd chanted while blowing horns and whistles during his speech.

Babis, a populist billionaire, is a controversial figure because of a power-sharing deal with the maverick Communist Party and fraud charges he is facing. His position is also complicated by allegations he collaborated with the former communist-era secret police.

Troops from the Warsaw Pact, a military alliance formed in 1955 between the Soviet Union and seven Eastern European nations, invaded Czechoslovakia on August 20, 1968 to crush liberal reforms enacted in the brief era known as the Prague Spring. The country was subsequently taken over by a hard-line Communist regime fully loyal to Moscow.

In 1968 alone, 137 people were killed by Warsaw Pact soldiers, and a total of more than 400 died during the occupation of Czechoslovakia that ended only after the 1989 anti-communist Velvet Revolution.

"But let us use this day of solemn commemoration to collectively remember that freedom and the respect for human rights can never be taken for granted and need to be fought for every single day," he said.

In another move related to the anniversary, which will likely anger Russia, Prague authorities unveiled a new explanatory text about the role of Soviet World War II commander Ivan Stepanovic Konev to his monument in Prague.

Marshall Konev led Red Army forces that liberated large parts of Czechoslovakia from Nazi occupation in 1945. His monument was unveiled in the Prague 6 district in 1980.

On Tuesday, Prague 6 mayor Ondrej Kolar said the authorities wanted to give people "full information that would not conceal what happened."

The new text describes Konev's leading role in crushing the 1956 anti-Soviet uprising in Hungary, his contribution to the construction of the Berlin Wall and the preparation of the 1968 invasion of Czechoslovakia.

Russia and four other former Soviet republics had officially protested that.

A small group of communists condemned at the site what they called "the rewriting of history."

Others demanded the monument was completely removed given what Konev had done. 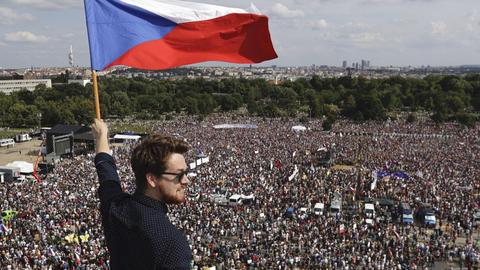