Seif Eddin Mustafa hijacked a domestic EgyptAir flight from Alexandria to Cairo and diverted it to Cyprus in 2016, taking 72 passengers and crew members hostage with a fake suicide belt.

Greek Cypriot police say an Egyptian man who in 2016 hijacked a domestic EgyptAir flight and ordered it to land on the east Mediterranean island has been extradited to his homeland.

Seif Eddin Mustafa boarded an EgyptAir flight that took off for Egypt on Saturday evening, police said on Sunday.

Mustafa commandeered a domestic Alexandria-Cairo flight with 72 passengers and crew on board in March 2016, ordering it to land in the island's Larnaca airport.

He surrendered to Greek Cypriot authorities about six hours after he landed, having gradually released all passengers and crew unharmed.

Mustafa had taken charge of the early morning flight by showing flight attendants what appeared to be a belt stuffed with plastic wires and a remote control.

After directing the flight to Cyprus, he asked for the release of female prisoners in Egypt, and to have contact with his Greek Cypriot ex-wife.

Justice Minister for the Greek Cypriot administration, Ionas Nicolaou, told The Associated Press that Mustafa's extradition went ahead after he dropped a three-year legal fight to avoid his extradition.

Doros Polycarpou, with the migrant support group KISA that assisted Mustafa, told the AP the 62-year-old decided of his own accord to return to Egypt and face prosecution there, despite fears that he may be tortured.

Last year, the European Court of Human Rights blocked the Greek Cypriot administration, which despite only controlling the island's south is considered by all in the international community besides Turkey to be the only legitimate authoritative body in Cyprus, from extraditing Mustafa until it could examine the case. 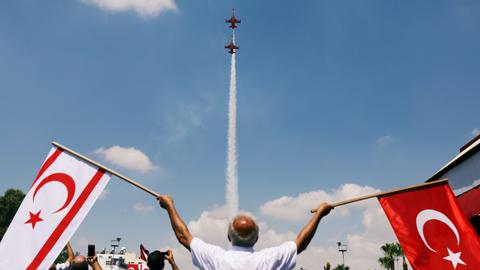