Paris will introduce legislation in February to toughen sanctions on undeclared protests in response to violent yellow-vest demonstrations.

France plans to introduce legislation to toughen sanctions on undeclared protests in response to violent yellow-vest demonstrations, Prime Minister Edouard Philippe said on Monday in a hardening of the government's stance on the unrest.

He spoke after rioters torched motorbikes and set barricades ablaze on Paris's upmarket Boulevard Saint-Germain on Saturday, underscoring how protests against high living costs and President Emmanuel Macron have turned violent on the fringes.

"We need to preserve the right to demonstrate in France and we must sanction those who break the law," Philippe told TF1 television.

He said the government could model the new law on existing legislation against football hooligans whereby individuals can be banned from stadiums. It could be introduced as soon as February, he said.

Philippe also said the "casseurs", or thugs, who have brought disruption and destruction to Paris and other major cities where shops have been looted and banks vandalised would be forced to pay for the damage they cause.

Officers fired tear gas to prevent protesters crossing the river and reaching the National Assembly. One riverboat restaurant was set ablaze and a policeman was wounded when he was hit by a bicycle hurled from a street above the river bank.

Two months after they started blocking roads, occupying highway tollbooths and staging sometimes-violent street protests in Paris, the yellow vests aim to inject new momentum into a movement that weakened over the holidays. 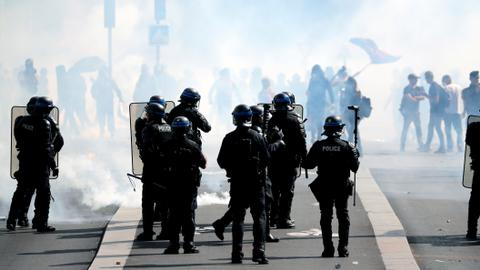