George Soros foundations' office to pull out of Hungary

The move follows Prime Minister Viktor Orban's blaming of Hungarian-born US financier Soros for a host of ills. Orban is planning to tighten a crackdown on non-governmental organisations under legislation dubbed the "Stop Soros" bill.

George Soros' Open Society Foundations will close their office in Budapest and move to the German capital of Berlin, the organisation said on Tuesday, leaving what it called an increasingly repressive political and legal environment.

Hungarian Prime Minister Viktor Orban has blamed Soros, a Hungarian-born US financier, for a host of ills and is planning to tighten a crackdown on non-governmental organisations (NGOs) under legislation dubbed the "Stop Soros" bill.

"The government of Hungary has denigrated and misrepresented our work and repressed civil society for the sake of political gain, using tactics unprecedented in the history of the European Union," Patrick Gaspard, president of the Open Society Foundations, said in a statement.

A senior minister in Orban's new government said on Monday that Hungary would tighten the bill on non-government groups following the ruling party's big election victory last month, a move likely to dismay the European Union and rights groups.

Open Society said it would continue to support the work of civil society groups in Hungary on issues such as human rights, arts and culture, media freedom, transparency, and education and health care.

It added, however, that it would "pursue all available legal avenues to defend the fundamental rights that are threatened by the legislation".

The bill would allow the interior minister to ban any NGOs active in the immigration field deemed to pose a "national security risk". It would also impose a 25 percent tax on foreign donations to NGOs that back migration. 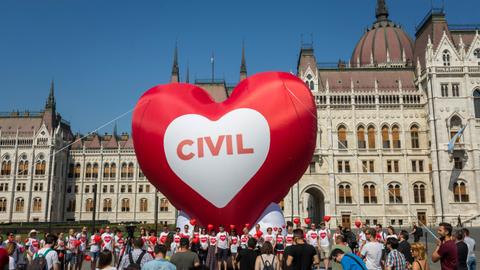