1
France tightens security, arrests one more suspect after Nice church attack
2
Is French secularism a divisive force in the country?
3
Man shot dead by French police in Avigon belonged to extreme-right group
4
Macron: France would see 400,000 new Covid-19 deaths 'if we did nothing'
5
'Day of shame': UK Labour Party suspends Corbyn over anti-Semitism

Greece’s newly formed centre-right government has promised to take a tougher line on the refugee crisis and plans to set up a sea barrier and detention facilities.

Greece's conservative government has introduced a new plan to curb refugee inflows and its main feature is a floating net barrier in the Aegean Sea to prevent migrant boats and dinghies from entering its waters.

The move has evoked a sharp reaction with human rights groups and various European officials warning that Greece’s decision would deteriorate the already devastating conditions of refugees, and further worsen Europe’s refugee crisis.

Since 2015, millions of refugees mainly from Syria, Afghanistan and Eritrea, had taken extremely dangerous journeys to reach the European shores in Greece, Italy and Spain.

As far-right, anti-migrant rhetoric has become a norm in European politics, the EU has failed to take collective continental action to address the flow of refugees.

The proposed 2.7 kilometre-long netted barrier would be 1.1 metres tall, rising about 50 cm above the water, including flashing lights and reflectors to make the barrier visible for refugees who travel by boat at night. The project which costs 500,000 euros, aims to prevent refugees from landing on the Greek island of Lesbos.

Greek Defence Minister Nikolaos Panagiotopoulos told local Skai Radio that he believes the floating barrier would decrease the number of refugees, similar to a cement and barbed-wire fence that Greece built along its northern border with Turkey in 2012.

“It will be a natural barrier. If it works like the one in Evros... it can be effective,” he said.

However, rights activists do not agree with the minister's reasoning.

Amnesty International’s Research Director for Europe, Massimo Moratti, condemned the project saying: “[It is] an alarming escalation in the Greek government’s ongoing efforts to make it as difficult as possible for asylum-seekers and refugees to arrive on its shores.”

Flows of migrants to Greece slowed to a trickle after the EU and Turkey agreed in 2016 to seal off the Aegean route, before picking up again in August and September to the highest monthly numbers in the three years since the deal.

As the refugee arrivals are concentrated on the Greek islands, the conditions in overcrowded camps are poor and unsafe for thousands of refugees.

Adalbert Jahnz, Spokesman for the European Commission, said at a press conference in Brussels that Greece should not block access for asylum seekers.

“The setting up of barriers is not in and of itself against EU law,” Jahnz said.

“Physical barriers or obstacles of this sort should not be an impediment to seeking asylum which is protected by EU law.”

Nearly 60,000 refugees reached the Greek islands last year, nearly double the number recorded in 2018, according to the data from the United Nations’ refugee agency.

In the face of refugee waves however, Greece’s newly formed centre-right government has promised to take a tougher line on the refugee crisis and it plans to set up detention facilities to speed up deportations.

Greece’s Migration Minister Notis Mitarakis backing the floating barrier project made clear that Greece is not welcome to refugees.

“It sends out the message that we are not a place where anything goes and that we’re taking all necessary measures to protect the borders,” the Greek minister said. “The rules have changed.”

But the Greek government seems convinced that the building up a kilometres long barriers will stop refugees. Greek Prime Minister Kyriakos Mitsotakis admitted that “this issue is here to stay”.

“Europe will constitute a magnet for people from Africa and the Middle East. The phenomenon will continue and is likely to intensify,” the Greek leader said. 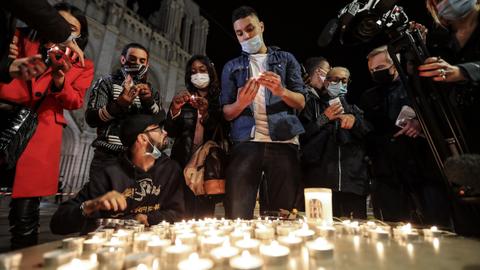 1
France tightens security, arrests one more suspect after Nice church attack
2
Is French secularism a divisive force in the country?
3
Man shot dead by French police in Avigon belonged to extreme-right group
4
Macron: France would see 400,000 new Covid-19 deaths 'if we did nothing'
5
'Day of shame': UK Labour Party suspends Corbyn over anti-Semitism