The left, centre and the right or the far-right are frequently used to define the political liberal to conservative spectrum in the news and end up defining public understanding of pivotal issues, but what do they really mean?

Talk show hosts and news editors assume the audience has a uniform understanding of the terminology. However, the definitions of the terms left and right —  and everything in between —  shift in meaning as global events impact politics, the actors and the political arena.

In the 21st century, these symbolic labels are defined by the rise of nationalist and anti-immigrant policies in European nations and the United States amid a surge in refugees and immigrants.

Rise of populism in Europe and immigration

The number of immigrants has risen in almost every European country since 2002, an Ifo DICE 2017 report calculated.

The rise in the vote-share of more conservative, nationalist parties has also gone up in all but four EU states since 2002; the report describes these as “far-right.”

A Reuters’ analysis suggests the EU Parliament will swing even more “right” over the next year.

The populist Europe for Freedom and Direct Democracy grouping in the European Parliament, dominated today by British UKIP and Italian 5-Star Movement, could grow to 58 from 45 seats. The Europe of Nations and Freedom grouping, which includes Marine Le Pen’s French National Rally and Geert Wilders’ Dutch Freedom Party, could nearly double to 62 seats from 35.

The terms left and right are popularly thought to have been coined in 1789 during the French Revolution when the anti-royalists sat on the left and the monarchists grouped to the right in the national assembly to display their differences over the king’s veto powers.

The terms' recurrence in popular opinion goes back to the 1820s, according to Marcel Gauchet. Gauchet pointed out that both left and right need a centre and they are defined by reference to this centre. Left and right represented the new and the old France, the liberals and the ultra-royalists.

The distinction between the left and right and the centre can partially be understood by the extent of state or government involvement desired, but also to the pluralism of political outlooks and parties.

The concept of “equality” and the response it demands also defines the symbolic political labels; the left tends to be more egalitarian, and the right less so. The right sees “inequalities as part of a natural order, 'outside the purview of the state',” Dutch political scientist Cas Mudde said, as cited in Aurelien Mondon's book.

If the left emerged from those looking to shake the monarchy, it logically ascribes to principles of equality, wealth redistribution and state welfare.

Broadly speaking, the left focuses on equal access to rights and services across the social classes, the fair division of labour and workers’ rights. It expects government intervention to guarantee the redistribution of capital, public social services, better living conditions and a reduction of inequalities.

This pits the left against the interests of the right which often tends to be led by the traditional elites, including the wealthy and the aristocracy.

The far-left includes a range of socialist, populist and communist ideologies which differ in practice and policy based on their approach towards liberal democracy, the political "bourgeois" and taking the movement beyond legislation.

Within the far-left, the extreme-left is against market enterprise, liberal democracy, and is open to taking the fight outside the remit of the parliament.

In contrast, the radical-left  "accepts democracy (verbally at least), although they combine this with aspirations towards direct democracy and/or local participatory democracy, including incorporating the rights of the excluded and marginalised [for example, the unemployed and migrant workers] in the political system,” Luke March, a University of Edinburgh professor in Soviet politics, wrote.

Countries like Cuba, North Korea, Vietnam and Laos are seen as more left-leaning.

"They are casting their problems at society. And, you know, there's no such thing as society. There are individual men and women and there are families,” Britain’s first female prime minister Margaret Thatcher said.

Her words illustrate how individual prosperity — even when imagined as the collective interests serving the individual elite or, previously, the monarchy and the church — outweighs collective social good for the right.

The ring wing takes on the defence of free markets with minimum state intervention and is not open to any kind of measures of social or economic equalisation, especially those which come at a high cost to the public purse.

As the politics of immigration entered public discourse in the 21st century, the right's free-market conservatism found a fellow ally in monoculturalism.

The far-right of today dresses naked xenophobia and racism with the rhetoric that refugees and/or migrants steal jobs from natives. Terror attacks are used to project the spectre of terrorism piggy-backing on refugees, helping justify more border controls. This projection is made while there is a negative correlation between migration and terrorist attacks.

This discourse has also taken a religious turn as many of the immigrants and refugees fleeing war try to find safety in Europe are Muslim. The "war on terror" post 9/11 normalised profiling based on nationality and religion.

At least 335 incidents of hate crimes were reported in the first half of 2018 in Austria. An Austrian Interior Ministry official described 95 of these incidents as racist, 29 as anti-Semitic and 9 as Islamophobic during a parliamentary hearing.

As the New Statesman points out, "Western right-wing populists are using Christianity as an identity marker between 'us' and 'them'. "

Extreme and radical-right are subtypes of the far-right.

The extreme-right opposes certain forms of “collectivism” and perceives an atomistic view of society. It believes in differences and natural inequalities, leading to exclusion of some groups deemed unwelcome and inferior.

Fascism, which is part of the extreme-right, fundamentally opposes democracy. In this perspective, “most importantly,” Dutch political scientist Cas Mudde wrote, “the radical-right is [nominally] democratic … whereas the extreme-right is, in essence, anti-democratic, opposing the fundamental principle of sovereignty of the people”

The term alt-right came into common parlance to describe a segment of US President Donald Trump's supporters and of society which has become more vocal since his election.

The alt-right is based on an ideology of white nationalism and anti-Semitism. It is anti-immigrant, anti-feminist and opposes homosexuality and transgender rights.

Politico magazine released a survey of registered voters in the run-up to the one year anniversary of the Unite the Right rally in Charlottesville, Virginia. It found 55 percent voters believe race relations have soured in the Trump era.

The centre of gravity for politics is the almost mythologised middle ground which can appeal to both ends of the political spectrum.

As a symbolic political label, the centre takes on some values of equality and some of socioeconomic hierarchy to appeal to the middle ground. And often centre-ground aspirations hit political parties during elections in the hope and belief that electoral success lies in the middle.

When the left and the right move, the centre shifts.

In Denmark, the left-wing opposition moved closer to the right with its silence when it did not oppose measures to sanction ghettos, ostensibly to help with integration. In 2016, the centre-right government, backed by the nationalist Danish People's Party, adopted a law requiring new asylum-seekers to hand over valuables such jewellery and gold to help pay for their stay in the country.

In Germany, support for Chancellor Angela Merkel’s centrist alliance slumped to a record low after a bruising internal row over migration policy, with support for the far-right Alternative for Germany (AfD) hitting a record high, according to the ARD DeutschlandTrend survey. 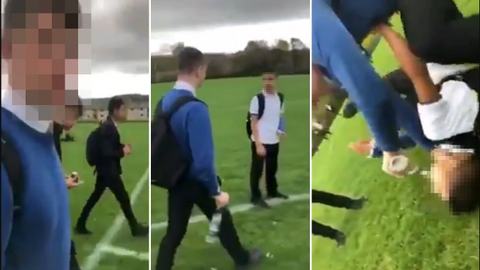