Policemen hurt during clashes at law-and-order protest in England

Thousands of demonstrators had converged in Bristol, ignoring Covid-19 restrictions, to protest against a government bill going through parliament that would give police new powers to restrict street protests.

Several policemen have been injured as violent clashes broke out after a demonstration in southwest England against increased police powers.

Thousands of people earlier gathered in Bristol city located west of England for the "Kill the Bill" protest in reaction to a controversial bill that plans to increase police powers against protesters.

"These scenes are absolutely disgraceful, and they will be widely condemned by people across the city. There can never be any excuse for a wanton disorder," Chief superintendent Will White said.

"Officers have been subjected to considerable levels of abuse and violence," he added.

White said a police officer "suffered a broken arm and another suffered broken ribs," and both were taken to hospital.

"At least two police vehicles have been set on fire, and damage has been caused to the outside of the station," White said.

"Thuggery and disorder by a minority will never be tolerated," she tweeted.

A local MP from the opposition Labour Party, Darren Jones, described the scenes as "completely unacceptable. You don't campaign for the right to peaceful protest by setting police vans on fire or graffitiing buildings.

"Avon and Somerset Police were on duty today to facilitate a peaceful protest not to deal with criminal behaviour," he said.

Mass gatherings are currently banned in England under coronavirus restrictions.

Protesters confronting police about an hour ago in Bristol city centre pic.twitter.com/Ak8R2pn69n

The controversial bill came under fire, especially after police intervention and arrest of some women in a peaceful vigil in Clapham, London, following the alleged kidnap and murder of Sarah Everard by an off-duty police officer earlier this month. 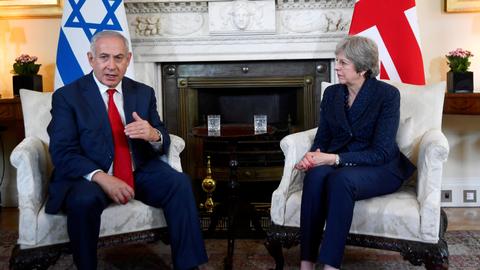 Britain's May tells Netanyahu of concern over Gaza deaths