The Russian Investigative Committee says an 18-year-old student identified as Vladislav Roslyakov arrived a vocational college in the Crimean city of Kerch with a rifle and killed 19 people.

The death toll in a gun attack by a student at a college in Crimea on Wednesday has risen to 19, Russia's health ministry said.

The Investigative Committee said an 18-year-old student identified as Vladislav Roslyakov arrived at the vocational college in Kerch early on Wednesday afternoon with a rifle and opened fire. The investigators said all the victims have died of gunshot wounds.

The investigators had earlier put out a statement saying an improvised explosive device went off in the college.

The investigators cited camera footage showing that the man opened fire on people and later killed himself. The investigators said they will now treat the incident as a mass murder and not as a terrorist attack.

Russia President Vladimir Putin promised that the government will do everything necessary to help those wounded.

Russia annexed Ukraine's Crimea region in 2014, prompting international condemnation and Western sanctions. Kerch is the point on the peninsula where a bridge linking Crimea to Russia makes landfall on the Crimean side.

Russian President Vladimir Putin opened the bridge to road traffic in May this year, getting behind the wheel of a truck to drive it across the bridge. 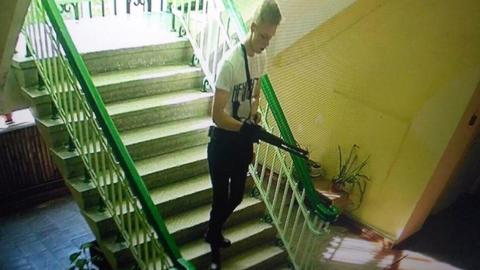