Anti-corruption activist Zuzana Caputova has become Slovakia's first female president-elect. Here is what you need to know about her.

Zuzana Caputova, a liberal public prosecutor, has won the presidential election in Slovakia.

According to the official final result published on Sunday, the 45-year-old achieved 58.4 percent of the votes in the decisive second round.

This will be the first time that a woman has been the head of state in Slovakia. Her opponent, EU Commissioner Maros Sefcovic, nominated by the governing Social Democratic Party, managed 41.6 percent of the votes.

At 41.8 percent, voter turnout was the lowest since of elections in autumn 1989.

The election winner announced that she will host talks with current government on close cooperation despite the decisive result. But, her formal assumption of office will not take place until June 15.

She graduated in 1996 and subsequently worked for several years in the local municipality of the small western town of Pezinok, close to the capital Bratislava, first as a member of the legal department and later in the executive committee of the city administration.

In 2010 she founded a law firm and worked as a lawyer for years. Her work at the Open Society Foundations - which was founded by George Soros - was one of the most common reasons for criticism against her during the election campaign

Caputova is a mother of two and lives with the musician, photographer and author Peter Konecny.

She joined the social liberal party Progresívne Slovensko (Progressive Slovakia), founded in 2017, and was elected vice president at the first party convention in January 2018. After the announcement of the 2019 presidential election result, she resigned as deputy leader of the party and announced that she would also suspend her membership.

Caputova advocates for minorities, such as the Roma or the Hungarian minority in Slovakia, for adoption rights for same-sex couples, and fights against corruption. In 2016 she received the Goldman Environmental Prize for her environmental advocacy.

Pro-European against a tide of Euroscepticism

Kiska, who did not run for office, congratulated the president-elect, saying: "Many countries envy us for having elected a president who symbolises values like decency in politics.”

Although defeated, Sefcovic stressed the pro-European orientation that had united both opponents.

Caputova said that she wanted to make her first trip abroad to the Czech Republic. Since the peaceful division of Czechoslovakia in 1993, newly elected heads of government and heads of state have always travelled first to their brother country. 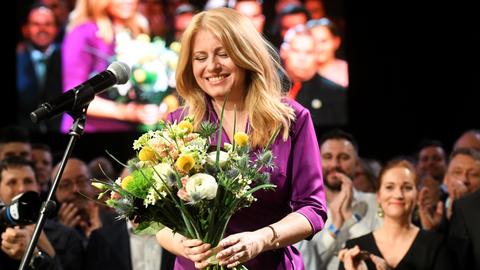