Under the deal, Berlin pledged to respond to any attempt by Russia to wield energy as a weapon against Ukraine and other central and eastern European countries.

The United States and Germany have unveiled an agreement on the Nord Stream 2 gas pipeline.

"The United States and Germany are united in their determination to hold Russia to account for its aggression and malign activities by imposing costs via sanctions and other tools," the two countries said in a joint statement on Wednesday.

Under the deal, Berlin pledged to respond to any attempt by Russia to wield energy as a weapon against Ukraine and other central and eastern European countries.

The pact aims to mitigate what critics see as the strategic dangers of the $11bn pipeline, now 98 percent complete, being built under the Baltic Sea to carry gas from Russia's Arctic region to Germany.

US officials have opposed the pipeline, which would allow Russia to export gas directly to Germany and potentially cut off other nations, but the Biden administration has chosen not to try to kill it entirely with US sanctions.

Instead, it has negotiated a pact with Germany that aims to impose costs on Russia to prevent it from using the pipeline to harm Ukraine or other countries in the region.

If Russia attempts to "use energy as a weapon or commit further aggressive acts against Ukraine," Germany will take steps on its own and pushing for actions at the European Union, including sanctions, "to limit Russian export capabilities to Europe in the energy sector," the statement says.

"This commitment is designed to ensure that Russia will not misuse any pipeline, including Nord Stream 2, to achieve aggressive political ends by using energy as a weapon," it says.

The foreign ministers of Ukraine and Poland reacted to the deal saying the Nord Stream 2 gas pipeline led to new "political, military and energy threats" for Ukraine and Central Europe.

"Such a decision has created additional political, military and energy threats for Ukraine and Central Europe on the whole," Ukrainian Foreign Minister Dmytro Kuleba and his Polish counterpart Zbigniew Rau said in a joint statement.

Earlier on Wednesday, the United States announced it had reached an agreement with Germany on the Nord Stream 2 pipeline that would threaten Russia with sanctions and seek to extend the transit of gas through Ukraine.

The Kremlin said that the leaders of Russia and Germany, Vladimir Putin and Angela Merkel, were both "satisfied" with the pipeline's near competition.

In Germany, top members of the environmentalist Greens party called the reported agreement "a bitter setback for climate protection" that would benefit the Russian President Vladimir Putin and weaken Ukraine.

Republican Senator Ted Cruz, who has been holding up President Joe Biden's ambassadorial nominations over his concerns about Nord Stream 2, said the reported agreement would be "a generational geopolitical win for Putin and a catastrophe for the United States and our allies."

Under the agreement, Germany and the United States supported a 10-year extension of the Russia-Ukraine gas transit agreement, a source of major revenues to Ukraine, that expires in 2024. 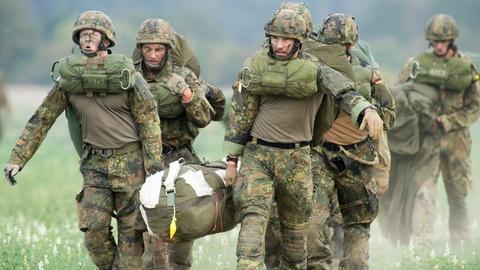