The number of protesters demonstrating in Paris keeps going down sharply as appeal for sixth straight Saturday protest across the country appeared to fall on deaf ears.

French Yellow Vests turned out in small numbers for the sixth Saturday of nationwide demonstrations, with one person killed in a road accident, the tenth death since the protests began last month.

In Paris, the scene of violent clashes in previous demonstrations, traffic was normal in the morning and most shops, except for some luxury boutiques, were open for business at the busy weekend before Christmas.

David Delbruyere was one of about 20 protesters near the Arc de Triomphe, the fifth time he has come to the French capital to join a demonstration. And he wasn't discouraged by the small turnout so far.

Some 200 people gathered for a demonstration in Paris' tourist area of Montmartre and the Sacre Coeur basilica.

In all, around 800 Yellow Vests showed up for small demonstrations around the French capital, police said at mid-day.

Authorities were also stationed at the Palace of Versailles outside Paris which has been closed to visitors over fears of unrest.

A Facebook event organised by Yellow Vest leader Eric Drouet listed 1,400 people as planned "participants" in the Versailles demonstration with a further 8,000 people saying they were "interested".

Overnight in Perpignan in southern France, a driver was killed when his car collided with a truck stopped at a roadblock set up by Yellow Vest protesters at the entrance to an autoroute, said prosecutor Jean-Jacques Fagni.

There have now been 10 deaths related to the protests since they began on November 17.

Around 50 Yellow Vest protesters briefly blocked trucks near the border between France and Spain before gendarmes stepped in.

Blockades were also reported in northern France near the border with Belgium.

Further demonstrations were planned for Saturday in Lyon, Toulouse, Orleans, and Brittany.

The number of protesters has however fallen significantly since last week, when President Emmanuel Macron, a pro-business centrist, gave in to some of their demands.

The interior ministry estimated the numbers taking part in various protests on Thursday at under 4,000, the lowest since demonstrations began.

The movement characterised by the high-visibility yellow vests worn by the protesters originally started as a protest about planned fuel tax hikes, but has morphed into a mass demonstration against Macron's policies and top-down style of governing.

On Friday evening, the French Senate approved Macron's raft of measures to help the working poor and pensioners –– just hours after they had been adopted by the lower house of parliament –– which aim to quell Yellow Vest anger and should come into force early in 2019.

In the southwestern city of Toulouse on Thursday, some 30 protesters held a rally lampooning Macron on his 41st birthday.

"We haven't brought him any presents because he hasn't given us any," said one protester. 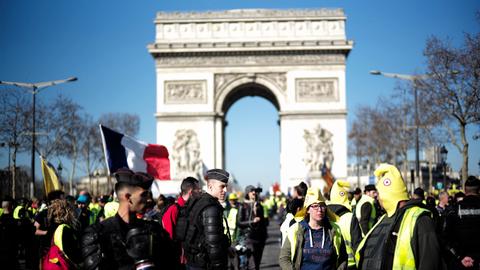 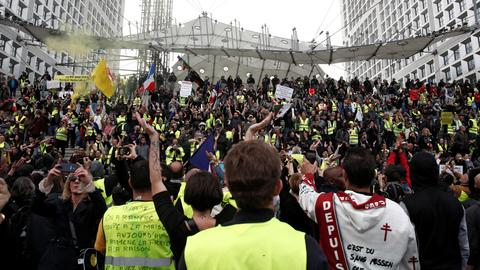