Burberry said in its statement that the company's use of real fur had "been restricted for many years to rabbit, fox, mink and Asiatic raccoon", adding, "Going forward, these and angora will be" phased out.

"Modern luxury means being socially and environmentally responsible," Gobbetti said in a statement.

"This belief is core to us at Burberry and key to our long-term success," he added.

VICTORY! Cartwheels are happening at PETA following the announcement that, after more than a decade of campaigns, @Burberry is banning fur and angora from its collections. 👏👏❤😁 #FurFreeBritain pic.twitter.com/eMAlCG5qbo

Burberry said in its statement that the company's use of real fur had "been restricted for many years to rabbit, fox, mink and Asiatic raccoon", adding, "Going forward, these and angora will be" phased out.

It added that there would be no real fur in Riccardo Tisci's debut collection revealed later in September.

Mark Oaten, chief executive of the International Fur Federation, expressed disappointment, saying more was needed in order to ensure respect for the environment.

"Substituting natural fur with plastic petroleum-based materials, like fake fur, is ... neither luxury nor responsible and sustainable," he said in a statement.

"Any fashion business with a commitment to sustainability should be using natural products such as wool, cotton, leather, silk and natural fur," he added.

On ending its part in the industry-wide practice of burning unsold goods, Burberry said:

"This commitment builds on the goals that we set last year as part of our five-year responsibility agenda and is supported by our new strategy, which is helping tackle the causes of waste.

"We already reuse, repair, donate or recycle unsaleable products and we will continue to expand these efforts."

Burberry and its peers have been burning tens of millions of dollars worth of products annually to maintain the exclusivity and luxury mystique of their brands.

Burberry burned unsold clothes, accessories and perfume worth $37 million, according to its last annual report in July.

But Gobbetti, who last year took over from Christopher Bailey, is shaking up the brand with a strategy overhaul that aims to add even more luxury to the fashion house's products.

One of his first moves was to appoint Tisci, who Gobbetti worked with at Givenchy, as Burberry's chief creative officer.

Tisci also replaced Bailey, who stepped down from the dual role of CEO and chief creative officer. 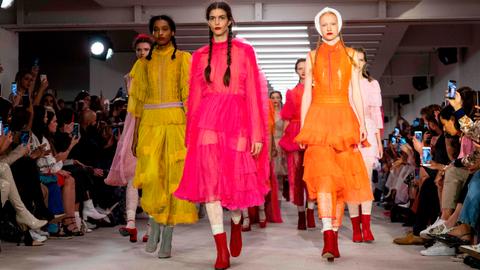