An organization in Ethiopia called Together offers shelter to visually impaired single mothers. Many of these mothers have been living on the streets. After rehabilitation, the women are given support to become self-sufficient and employed.

An organisation in Ethiopia called Together is offering shelter to single mothers who are visually impaired. Many of these women are homeless. Once rehabilitated they're given support to help them stay off the streets.

One of these women is Zenebech Wolde, who used to have a decent life with her two children and a husband who provided for the family. After his sudden death around two years ago, she was left confused and desperate. She started to beg in the streets.

"Life in the streets is very tough, nobody likes it. We were exposed to extreme cold and the sun hits you hard too. We were never sure if we would eat. We were exposed to diseases and the children would get sick often because of the cold. Street life is ugly." said Zenebech Wolde.

A friend told her about Together, an organization for the visually impaired that would provide her with temporary shelter. She was accepted and now this will be her home for the next 6 months.

At the Together shelter, visually impaired mothers are thought how to prepare food and look after themselves. They are given support to become self-employed and independent.

"We want to encourage all visually impaired people on way of life. We just need to show them the way, after that they can help us the sighted people not only themselves, not only their families but they will support also sighted people" the Co-founder of Together Martha Negussie said.

Every year the shelter can accommodate 6 women like Zenebech. Since 2013, 24 women have been assisted.

"I support my child with the income from this business. I pack good food for him every day in his lunchbox. He started school this year. He is 4 years and 3 months now and I can buy all that is needed at his school" said Fascia Abebe, who can now pay for rent every month and provide for her son by making use of her training in Together and making and selling Ethiopia's local bread.

There is also a nursery in the shelter for the children of the visually impaired women where they are looked after while their mothers get training and rehabilitation.

A National Survey on Blindness, Low Vision and Trachoma showed there are 1.28 million blind people and another 2.96 million people with low vision in Ethiopia.

Those who are not lucky enough to get free rehabilitation and support like Zenebech, have to rely on others or end up in the street. 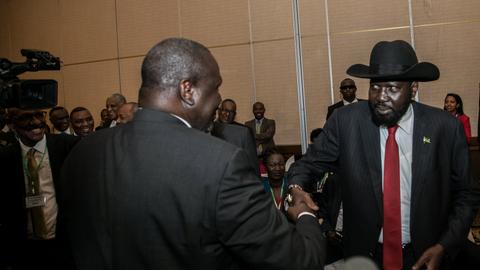