Meghan Markle and Prince Harry's nuptials have everyone in a twist, from the father of the bride to the outfit of the groom to their new residence. But one serious issue the royal wedding has helped to highlight is growing homelessness in Britain.

Britain's latest royal couple has thrown up more "will they, won't they?" than Ross and Rachel. But will Meghan Markle and Prince Henry manage to do what other royals couldn't, and draw the attention of more than super super super fans?

When Harry carries his new bride over the threshold after their wedding on Saturday, it will be into a two-bedroom house that estate agents might euphemistically describe as "bijou".

Like many young couples squeezed for space as they grapple with Britain's sky-high property prices, Harry, 33, and 36-year-old Meghan Markle will start married life in a small cottage, but unlike the rest of their peers, their postcode will be the grounds of Kensington Palace.

Nottingham Cottage is one of the smallest on the grand royal estate in central London, which is also home to Prince William and his wife and has housed much of the royal court since 1689. Meghan and Harry are, however, rumoured to move into a 21-room apartment on the estate eventually.

While few have relatives as wealthy as Harry's grandmother, Britain's Queen Elizabeth, experts say more and more young people are having to rely on their parents to get onto the property ladder.

"Today's young people, millennials, are half as likely to own their own home at the age of 30 as baby boomers were in the past," said Lindsay Judge, a senior research and policy analyst at British think-tank Resolution Foundation.

"This is largely due to increased barriers to entry because of higher house prices, lower earnings growth and tighter credit availability - so they've got a triple whammy," she told the Thomson Reuters Foundation.

Baby boomers are considered to be people born before the mid-1960s while millennials are those born between 1981 and 2000.

In the 1980s and 1990s, it took the typical young household about three years to save for a deposit.

Now it takes 19 years, according to a Resolution Foundation statistic that Judge called "shocking."

The rise in housing costs is a major cause of growing homelessness in Britain - an issue the royal wedding has helped to highlight.

Earlier this year a local government leader triggered a public outcry when he called on police to remove rough sleepers from the picturesque town of Windsor, where the wedding will take place.

"I think it's a very clever way of Harry and Meghan making a statement without using words, as they're not allowed to be seen to be political," said Murphy James of Windsor Homeless Project, a local drop-in service.

Crisis Chief Executive Jon Sparkes said the royal stamp of approval was already bringing in donations to the charity and would help highlight the problem.

About 160,000 households are currently affected in Britain and rough sleeping is forecast to rise by 76 percent in the next decade unless the government steps in, Sparkes said.

Homelessness does not just include rough sleeping but the many young people sofa-surfing or using temporary accommodation due to a lack of secure housing options, he added.

Meanwhile, for royal fans and anti-royalists who can afford it, there are enough memorabilia to go around.

If royal figurines and buntings don't do it for you, there's now a public house serving up more wedding madness.

Just a stone's throw away from Windsor Castle, the final touches are being made to a popular haunt which shares its new name with the groom: "The Prince Harry" pub.

Previously known as "The Three Tuns," the pub sports a new sign, a portrait of the prince and plenty of balloons and flag decorations. The pub is also serving a local royal wedding pale ale ahead of the big day. 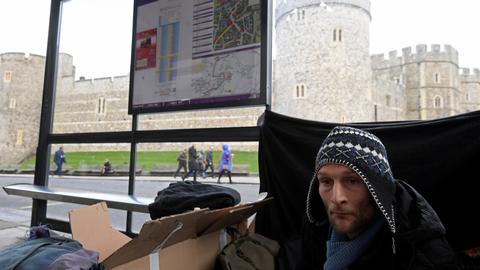 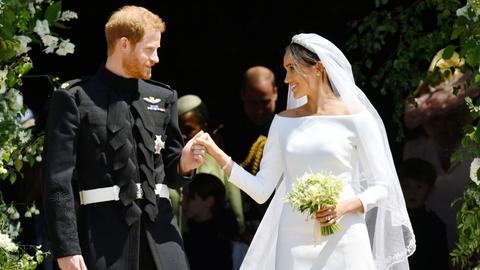