With the launch of the world's third longest scheduled passenger flight, here is a brief look at some of the those that span the globe.

The "Kangaroo Route" from Australia to Britain became a shorter hop on Saturday when the first direct passenger service left Perth for London, with the 17-hour flight set to break aviation records.

Qantas' 14,498 kilometre (9,009-mile) journey from the southwestern city to London is the world's third-longest passenger flight, the Australian carrier said, and the first ever regular service to connect the two continents directly.

Captained by Lisa Norman, it will also be the longest Boeing Dreamliner flight in the world.

The new link is part of Qantas' ambitious plans, unveiled over the past two years, to add ultra long-haul flights to its global schedules.

This will eventually include non-stop flights from Australia's eastern seaboard to Europe in an effort dubbed "Project Sunrise".

The world's second-oldest airline operated its first "Kangaroo Route" service, from Sydney to London, in 1947, when it took four days and nine stops.

A key concern for the Australian airliner has been beefing up comfort levels for the ultra-long journey, with passengers set to enjoy improved air quality, lower cabin noise and reduced turbulence.

Some passengers will also wear special monitors and devices so researchers from the University of Sydney can collect data on their sleeping and activity patterns, mental state, eating patterns and hydration before, during and after their long flight, Sydney's Daily Telegraph reported.

It is not the first time Qantas has undertaken a direct flight from Australia to Europe.

The carrier in 2015 flew a one-off charter service from Perth to Istanbul to take Australians to Turkey's Gallipoli to mark a centenary since troops from the Australian and New Zealand Army Corps (ANZAC) fought there in World War I.

Qantas also flew one non-stop passenger flight from London to Sydney in 1989 with a Boeing 747.

The service makes Qantas one among a handful of airlines that operate on such long-distance intercontinental routes.

Here are some of the world's longest flights:

Qatar Airways Flight 921 is currently the longest commercial journey in the world, flying passengers over 14,500 km (9,000 miles) from New Zealand to Qatar in nearly 18 hours on Boeing 777 airliners.

Auckland is also the origin of Emirates Airline Flight 449, with Airbus A380 superjumbos travelling 14,200 km in 17 and a half hours to Dubai.

The new Qantas service is the first regular link between Australia and Europe, with the airline's Boeing 787 planes connecting Perth and London in just over 17 hours. The 14,500-km route is part of the airline's ambitious plans to eventually connect Europe with airports on Australia's eastern seaboard as new, more efficient aircraft become available.

United Airlines launched its service connecting Los Angeles' LAX airport to Singapore using 787s last year, saying the 14,100-km link would be the longest non-stop flight -- in terms of distance -- from the United States to anywhere in the world.

United's 787s also connect Houston in the southern US to Australia, crossing 13,800 km in around 17 and a half hours.

The longest flights operating today pale in comparison with Singapore Airlines Flight 22. The carrier flew Airbus A340 airliners from the city-state to New York's Newark airport -- a journey of over 15,000 kilometres -- from 2004 to 2013, when the service was suspended to cut costs. But the airline plans to restart flights on the route, using the ultra-long range version of the Airbus A350. 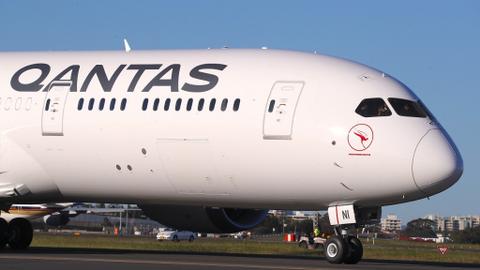