The United Nations is the main provider of reproductive health services in Yemen, where a long-running conflict has left 80 percent of people reliant on aid, but it has been forced to cut back its operations due to a funding shortfall.

Women in Yemen are already dying in childbirth and thousands more will be put at risk as UN funding cuts force reproductive health services to close, doctors and aid workers have warned.

Last month the UN Population Fund (UNFPA) stopped providing reproductive services in most of the 180 facilities it supports in Yemen, leaving about 320,000 pregnant women without care.

Since then, at least two women whose local maternity facilities closed have died in childbirth, said Nestor Owomuhangi, deputy representative of the UNFPA in Yemen.

"Complications cannot be handled at home, they have to be attended by a skilled health worker," Owomuhangi told the Thomson Reuters Foundation.

"Where you have no specialised care to at least check the dangerous signs of pregnancies, that's our worry."

His comments came after the head of the UNFPA Natalia Kanem urged international donors at a conference on Tuesday to give more to fund its operations, saying Yemeni women "cannot afford to wait."

The agency said it had received only 41 percent of the $100.5 million it needs to fund its operations this year, even as it grapples with the impact of the coronavirus on a population weakened by malnutrition after five years of conflict.

The conflict between a Saudi-led coalition and the Iran-aligned Houthi group has displaced 3.6 million people, and healthcare services are collapsing.

Jan Egeland, who heads the Norwegian Refugee Council, said millions of Yemenis were "staring down the double barrel of starvation and a global pandemic."

"Today we're in paralysis in the face of the corona pandemic, economic collapse, a war crisis and the disruption of financial support," she said by phone from the port city. "We are now in need of immediate and urgent support."

The UNFPA was the main supporter of reproductive healthcare in Yemen, equipping maternity wings and funding the pay of 3,800 workers who provide care to about 2 million women.

Yasser Nasser said cuts meant the Hajdah hospital where he works as technical director had lost its paediatrician, anaesthesiologist and midwives and had to stop providing free care.

"People are barely able to afford the transport to come to the hospital from their villages," he said. "When we tell them the truth ... the shock is visible on the patients' faces."

Doctor Eshraq Omrani lost her job at the Shahel Rural Hospital in a remote town in northwest Yemen in May because the hospital could no longer afford to pay her or her colleagues in the maternity wing.

She said patients were still turning up to the hospital, but could not be given help.

"Whoever doesn't die of corona will now die because of pregnancy and childbirth complications," she said. 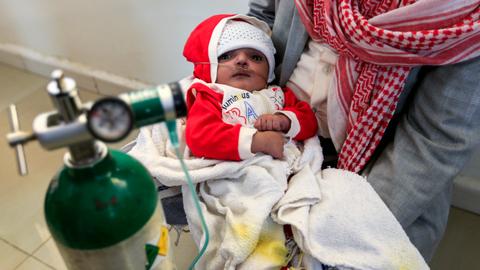