A who's who of the Assad family in Syria

Sunni majority Syria was carved out of Ottoman Turkey in 1945, but since 1970, the Assad clan from an Alawite minority has ruled over it.

Mirroring the turbulent history of Iraq, Syria has also gone through political and social turmoil since it broke away from Ottoman Turkey and two decades later gained independence from French colonial rule.

The Assad family, part of the Alawite religious sect, which is considered to have secure connections with Shiism, has ruled Syria, a Sunni-majority country, for the last five decades.

The family traces back its roots to Qardaha, a mountain village in Latakia in northwestern Syria, where the ancestors of current regime leader, Bashar al Assad, had lived at least since the 19th century.

Since then, much of the state apparatus and economic life has been controlled by different family members.

Here is a simple list of the family’s powerful figures.

Born in 1930, Hafez al Assad joined the Syrian military as a 20-year-old. He wanted to be a medical doctor, but his family’s economic conditions could not allow it, and this pushed him towards the military.

Eventually, he became a pilot in the Syrian Air Force. Fourteen years after joining, he became its top commander in 1964.

During his high school years, he joined the Baath Party, which synthesised socialist and nationalist ideas for a pan-Arabist ideology. This period helped him develop a large political network of people and families.

In 1957, Hafez al Assad was married to Anisa Makhlouf, a member of an influential Alawite family from Latakia.

During his military and political career, Hafez was involved in several military coups. Through them, he cemented his position as an indispensable public figure. After military coups in 1963 and 1966 with other like-minded officers, he finally claimed absolute power in 1970.  He became the president of Syria with all the unbridled powers suiting a dictator.

Until 2000, he led Syria with an iron fist, suppressing rebellions by force and leaving a violent legacy to his son, Bashar al Assad, who emulated his harsh methods and repressed the Arab Spring protests in its early stages in 2011. The trail of destruction that Assad's police and armed forces left sparked a brutal civil war.

While Hafez al Assad empowered his family clan in all aspects of Syrian life, he did not appear to be a family man at all.

“We saw father at home but he was so busy that three days could go by without us exchanging a word with him. We never had breakfast or dinner together, and I don't remember ever having lunch together as a family, or maybe we only did once or twice when state affairs were involved. As a family, we used to spend a day or two in Lattakia in the summer, but then too he used to work in the office and we didn't get to see much of him,” remembered Bassel al Assad, Hafez’s eldest son, who was expected to succeed the father.

Bassel died in a car accident in 1994, paving the way for Bashar al Assad’s ascendancy.

Rifaat al Assad had been a loyal companion to his older brother, Hafez, until 1984, when the president was in a coma. After Hafez al Assad in deteriorating health chose a six-member political committee - whose members happen to all be Sunni - to run the country in 1984, Rifaat protested and ordered his loyal troops to take over the state.

But after the two brothers met in Rifaat’s house, the younger brother decided to defer to the older brother, ordering his troops to pull back from their positions in the capital Damascus.

Since the 1984 skirmishes, Rifaat al Assad has been exiled to France and Spain in possession of large assets, including allegedly $300 million of Syrian public funds.

Rifaat was not happy about Hafez’s decision to appoint his son Bashar as successor in 1994, and has voiced his opposition to the Syrian regime from time to time, promising to return to Syria to claim power.

This week, a sentence looms from a Paris court over his corruption-related financial activities. French prosecutors accuse the uncle of Bashar al Assad of money laundering hundreds of millions of dollars from Syrian state funds.

Rifaat’s first wife is also a member of the Makhloufs, a powerful Alawite family.

Bashar is one of Hafez al Assad’s four sons. He also fathered a daughter, Bushra, but she has been living in exile in Dubai since early 2013.

In contrast to his brutality against Syrian protesters and his cruel policies during the civil war against opposition forces - which amount to war crimes according to many human rights organisations - at first, Bashar appeared to be a quiet, apolitical person. He began life as a doctor in 1988.

But when his politically active brother Bassel al Assad, the oldest brother in the family, unexpectedly died in a car accident in 1994, he was called to Syria from London to take over as the heir apparent to the father.

In 2000, following the death of his father, Bashar al Assad became the president of Syria, effectively keeping most of Hafez’s policies intact.

After becoming the president, Bashar got married to Asma, a British-Syrian investment banker who emanates from a prominent Sunni family. The two were not related to each other by blood.

Some have claimed that the marriage was a setup to ensure that Sunnis have a representation in Assad's dictatorial house.

Like his father, Bashar al Assad has given no space to opposing voices. He oversaw a brutal crackdown against opposition forces since 2011.

Millions of Syrians, who have been made refugees inside or outside Syria, hold him responsible for the destruction of the country’s political and economic system.

Since the beginning of the civil war, half of Syrians have become refugees. More than 400,000 people were killed under Assad’s brutal dictatorship.

Maher is Bashar’s youngest brother. He is known for his notorious atrocities against protesters and opposition forces during the Arab Spring protests and later in the civil war, too.

Maher was not chosen to lead the country by his father Hafez because he allegedly is said to have thought him to be more cruel than Bashar.

Maher is the top commander of the Republican Guard and the elite Fourth Armoured Division, which form the most essential forces of the country’s security apparatus.

According to different video footage, Maher personally shot unarmed protesters in several different locations. Former soldiers under his command have also reportedly said that Maher al Assad ordered them to kill demonstrators no matter whether they were armed or unarmed.

"We were ordered to aim for the head or heart from the beginning. We were not given specific numbers but told to kill as many as possible as long as there were protests," said one defected sniper.

Maher is considered to be the second most powerful man in Syria after the regime leader.

Another powerful Alawite family, the Makhloufs have also held powerful positions in Syria through marriages of their respective members to the Assad clan.

Hafez al Assad’s wife, the late Anisa Makhlouf, who also allegedly advised brutality against protesters, was one of them. Hafez’s brother Rifaat’s first wife was also a Makhlouf.

According to rumours, Bushra, Hafez’s only daughter, prevented her father from imprisoning her uncle after his revolt against the older brother in 1984 on the grounds that it could alienate the Makhloufs from the Assad family.

Rami Makhlouf, Anisa’s nephew and Bashar’s cousin, is Syria’s richest man. According to some report, he owns more than half of Syria’s wealth.

But in May, Bashar al Assad moved to purge his powerful cousin, confiscating most of his assets.

Some experts find similarities between what happened to Rifaat al Assad and the current infighting inside the regime.

“In this sense, we can find similarities between the past [referring to the fight between the two brothers]  and the current, referring to the struggle between Assad and Makhlouf,” Serhat Erkmen, a Turkish political analyst on Syria, suggested in a recent interview. 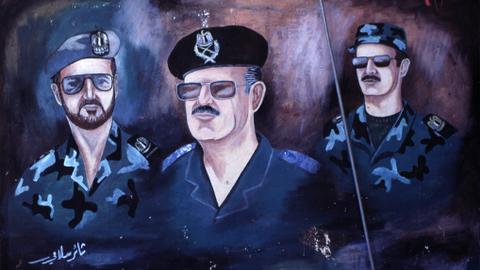