With its roots in colonial rule, anti-Muslim rhetoric is being used by French politicians to tap up potential voters.

With his declaration of war against so-called ‘Islamist separatism’ in February, French President Emmanuel Macron appeared to usher in a new phase in his country’s relationship with its Muslim communities.

Since the September 11th attacks, invocations by Western politicians against extremist groups claiming to act in the name of Islam have been commonplace but many policies introduced by European states seem instead to target normative Islamic practices.

France, in this example, is among several countries in Europe that have banned face veils worn by some Muslim women. It has also prohibited the wearing of the more common headscarf in public institutions.

Such policies targeting symbols revered by Muslims were justified by the claim that officials were integrating Muslim communities into wider society by forcing them to drop visible symbols of their difference or the claim they were ensuring the equal treatment of women.

Despite the implementation of these measures, French politicians of past and present, have gone to great lengths to assure the communities they were targeting that it was not their religion or ‘Muslimness’ itself that was problematic.

It is both contemporary examples and the history of French interaction with Muslim populations during the colonial era that belie this claim and leave it subject to debate.

Though exceptions exist, the dominant mode of thinking informing French imperialist conduct towards its Muslim subjects was explicitly anti-Islamic.

In the notable example of 19th century Algeria, which until independence in 1962 was annexed into France proper, French citizenship was denied to local Arab and Berber natives unless they renounced their Muslim faith, and dropped any association with aspects of Islamic cultures, such as the Arabic language.

The last point finds parallels in Macron’s recent policy announcements, specifically his decision to pull courses in Arabic and Turkish in public schools.

According to Qatar University academic Badran Ben Lahcen: “The French state’s call to integrate is intended to make Muslims completely abandon anything related to Islam, his views on life and the practice of their rituals.”

To that end, the French government wants to train imams inside the country according to its own approved version of the Islamic religion.

According to Ben Lahcen this is aimed at making the Muslim community more compliant towards the French government.

This policy is by no means limited to France’s own Muslim population but it is also reflected in Macron’s foreign policy.

As president, the self-declared centrist has sought to cooperate closely with human rights-abusing world leaders, such as Egyptian President Abdul Fattah el Sisi and the UAE’s Crown Prince Mohammed bin Zayed, in tackling what he describes as “Islamism”.

France’s own programme to create a ‘French Islam’ will be done so with the help of the UAE, a country that has jailed religious leaders at home, and carried out targeted assassinations of Muslim figures in Yemen.

Furthermore, it remains to be seen what Macron can learn from Sisi’s method of tackling supposed extremism.

After overthrowing Egypt’s only democratically elected leader, Mohamed Morsi, in 2013, Sisi carried out a massacre of more than 800 pro-democracy activists in Cairo’s Rabaa Square on the pretext of fighting extremism.

With France’s economy in tatters and a persistent Yellow Vest movement showing no signs of disappearing, the issue of Islam is one area on which he can draw voters.

For politicians across Europe, challenging suspicion against the Muslim community has taken a back seat to indulge such suspicions in the hope of tapping up the far-right vote. 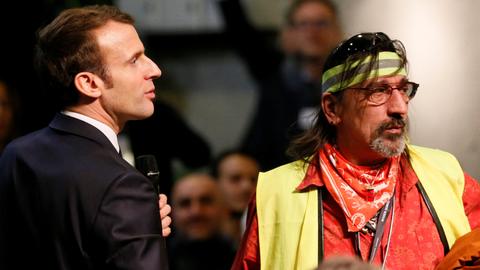