Experts at a two-day seminar in Istanbul expressed concerns about the worsening conditions of Muslims in Asia, with India and Myanmar being the two glaring examples of violence against Muslims being normalised.

Political leaders in Asia are exacerbating the problem of anti-Muslim sentiment by giving incendiary speeches for electoral gains, said Hassan Abdein, head of Muslim and Minorities department at OIC, at a two-day international seminar on Muslims and human rights in Istanbul.

Abdein said Asia is capitalism’s new home, and despite it being far more diverse than elsewhere, hosting hundreds of ethnic peoples, it is suffering from dark electoral populism, one of the exploitative effects of globalisation.

Under the garb of national security, he added, Muslims are being targeted and criminalised across the continent.

“Both in Myanmar and Sri Lanka, we see one particular group mobilising hate speech,” said Abdein, referring to Buddhist monks who have openly given calls of genocide against Muslims.

The academic said that since Buddhists have become a minority in the Hindu dominated subcontinent, they have engineered the narratives of victimhood to mobilise Buddhist populations in Buddhist-majority countries like Myanmar and Sri Lanka.

Abdein urged the audience to find ways to stand against this religious warfare, as ignoring anti-Muslims sentiment will only provide aggressors with more space and opportunity.

We need to celebrate the leadership that took concrete steps after the Christchurch Attack, Abdein said. He also applauded the Emergency Meeting held in Istanbul in 2019 to discuss the terrorist attack on the two mosques in New Zealand.

Ambassador Zamir Akram, Former Permanent Representative of the Islamic Republic of Pakistan to the UN, said that despite more than 200 million Muslims living in India, a version of fascism is taking place at the hands of Hindutva.

Millions of Muslims are suffering from religious and racial discrimination, ethnic cleansing, war crimes, crimes against humanity, and even genocide.

An esteemed panel of experts, diplomats, community leaders, and activists addressed “The Situation of Muslims in Asia” at the two-day seminar on human rights violations faced by Muslims in Istanbul, February 16-17 2022.

Explaining that the Modi government has been “seducing India on the basis of hate and envy when it comes to Muslims”, Ambassador Zamir said Muslims are facing problems on the pretext of “the slaughter of cows and eating beef, marrying Hindus", while "attacks on mosques, forced conversion to Hinduism, removal of Muslim names from streets, sale of Muslim women on mobile apps and open call for genocide against Muslims” have been normalised in the country's national discourse.

Zamir said that the Modi government is using the Citizenship Amendment Act (CAA) as a weapon to disenfranchise the Indian Muslims and force them out of the country.

Although the largest Muslim population is living in Asia, Muslims suffer from social and economic discrimination, and in some Asian countries like Myanmar and India, there is an escalating trend of systemic targeting of Muslim communities, said El Habib Bourane, Director of Muslim Communities and Minorities of the Organisation of Islamic Cooperation (OIC).

Habib said the OIC has been engaging in constructive dialogue with China for the past three years about the Uighur and Kazakh and Uzbek Muslim minorities.

Explaining that the Uighur's are not left alone in their plight, Habib also urged the OIC member states to build consensus on specific issues.

“The OIC delegations have visited the region twice to understand what is really going on. Until now, the UN has not been allowed to visit the Xinjiang Uyghur Autonomous Region of China,” said Habib, highlighting the importance of building on this dialogue.

Habib also highlighted the OIC’s efforts in Myanmar during the past 20 years, and the steps they have taken, together with the UN and European Union, to advocate for the Rohingya Muslims’ cause.

“Myanmar must fully comply with the provisional measures issued by the International Court of Justice,” Habib said, referring to the case of genocide brought against Myanmar by The Gambia at the UN court.

The people of Rohingya have been suffering for almost half a century now, said Reza Uddin, the Chairman of the Human Rights Committee and Council Member of the Arakan Rohingya Union.

“Restriction on religion, marriage, land ownership, deprivation from education and health, gang rape and human trafficking… all these violations are a blueprint of genocide,” he added.

Reza pointed out that Myanmar has been killing hundreds of their own people since the military overthrew the democratically elected government on February 1 2021. This is partly because of the government’s tendency to comply with the International Court of Justice’s ruling on the Rohingya case.

Why do we need to talk about Kashmir?

“Kashmir was known as the paradise in the world, renowned for its extraordinary beauty, but has become a hell for its people,” said Syed Ghulam Nabi Fai, Secretary-General of the World Kashmir Awareness Forum. He described Kashmir as “the most beautiful prison on earth.”

“Today Gregory H Stanton, the founder and president of Genocide Watch, warns that Kashmir is on the brink of a genocide,” Fai said.

Fai said Modi's rhetoric on foreign tours is entirely out of step with the reality in India. Giving an example from Modi's 2019 visit to Texas, Fai said Modi lied to the American people by calling India the world's "largest democracy", whilst the headlines from places like Kashmir tell a different story.

Fai gave an example of an article titled “As Kashmir Is Erased, Indian Democracy Dies In Silence”, published by The Huffington Post when Kashmir was under a strict military curfew.

Fai said the human rights situation has deteriorated to dangerous levels in the disputed region,  referring to restrictions on freedom of speech under the Unlawful Activities Prevention Act (UAPA), a draconian law used by the Indian state against civilians, especially journalists and human rights activists.

The UAPA  legislation allows the Indian government to jail an individual for six months without a trial or bail, stonewalling any judicial intervention. The state often justifies the UAPA by saying the law is used to “prevent terror-related activities, unlawful associations, and activities that may endanger the sovereignty and integrity of India.”

The UN has said that the UAPA utilises “imprecise criteria, contains a vague and overly broad definition of  ‘terrorist act’, allows people to be held in lengthy pre-trial detention and makes securing bail very difficult,” and that the UAPA does not meet international human rights standards.

Fai said the news media in Kashmir has been brought to extinction in order to silence dissent, urging the OIC members to initiate a solution. He also demanded the immediate release of political prisoners and the protection of the Kashmiri people before a full-scale genocide takes place.

[NOTE: The article came from TRT World’s Eyes on Discrimination (EOD) Centre, which monitors and reports on offences, hate crimes and discrimination on the basis of gender, race, ethnicity, national origin and religion, or other related social categories. We promote and encourage respect for human rights and fundamental freedoms for all without distinction as to race, sex, language or religion.] 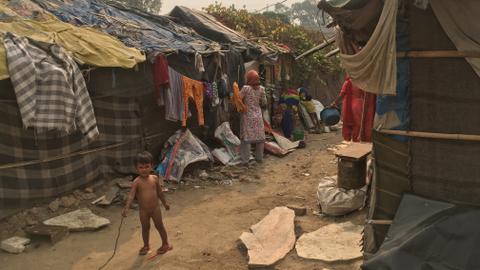 Rohingya refugees deported to Myanmar: 'We are the people of nowhere now'