Jamaicans seek compensation from the UK for enslaving their ancestors

Jamaicans are demanding “reparatory justice in all forms” for the UK’s past wrongdoings including slave trade that was enforced upon their ancestors.

Many European countries, primarily the UK, had been involved in various colonialist practices in the past centuries, changing the demographic, economic and social structures of continents from Africa to Americas and the Middle East.

They had inflicted significant damages, amounting genocides, over native populations across today’s Canada, the US, Australia and other places in Central and South America, conducting a slave trade by uprooting people from their homelands and shipping them off to far-off continents for illicit colonialist aims.

Jamaica, which has suffered from those atrocities much, now seeks billions of dollars in reparations from the UK, which had colonised the country until 1962 and used the ancestors of modern day Jamaicans for slave trade.

“Our African ancestors were forcibly removed from their home and suffered unparalleled atrocities in Africa to carry out forced labor to the benefit of the British Empire,” said Olivia Grange, Jamaica’s minister of sports, youth and culture.

Because Jamaica is still part of the Commonwealth, the British monarch, Queen Elizabeth II, still serves as the official head of the Caribbean state. As a result, under a petition, Jamaica has sought reparations from the UK government. The petition has not been filed yet, pending an internal legal process.

"We are hoping for reparatory justice in all forms that one would expect if they are to really ensure that we get justice from injustices to repair the damages that our ancestors experienced," Grange added.

Jamaicans had suffered from slavery not only under British rule but also Spanish colonisation, which began in 1509 with the European country’s first settlement, Sevilla, around St. Ann’s Bay. Britain took over Jamaica from Spain in 1655, establishing a colonial rule for more than three centuries there.

Being in the middle of the Caribbean Sea, Jamaica became a center of the slave trade for colonialist European states, which transported millions of enslaved Africans to the Americas to make them toil on hundreds of plantations of sugar cane, bananas and other crops.

The slave trade and free work made colonialist states richer while both enslaved Africans and native populations of the Americas suffered enormously under the brutal rule of European nations. More than 20 million Africans including children and women were brought to the Americas according to different estimates.

Among them, at least 600,000 Africans were also forcibly landed in Jamaica, according to reliable sources. Now Jamaica has a population of three million, most of whose ancestors were former slaves.

“Redress is well overdue,” said Grange, the Jamaican minister, referring to the country’s reparation request from the UK.

Paying back to enslavers but not to victims

While the UK has not addressed its past slavery practices in terms of paying reparations to victims and aiding colonised countries, where British enslavers were mainly the driving force behind the country’s colonialist policies, London has been so keen to compensate so-called losses of its slave owners following the abolishment of slavery in 1834.

The UK had paid billions of dollars to the slaveholders and their inheritors, taking a 20 million pound loan, which was a big money at the time of the abolishment of slavery. The British state had continued to pay even interest payments to those slaveholders’ inheritors until 2015 in the name of compensating their illicit losses.

Now Mike Henry, a Jamaican lawmaker and human rights advocate, calculates those payments to the slaveholders in total as being nearly 7.6 billion pounds or 10.5 billion dollars.

"I am doing this because I have fought against this all my life, against chattel slavery which has dehumanized human life." 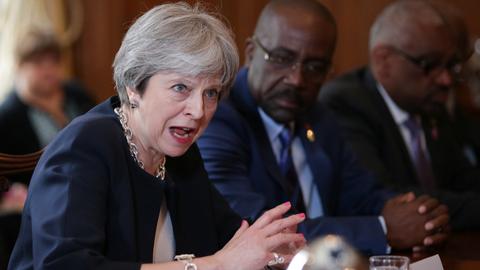 Britain's May apologises to Caribbean leaders over immigration mix-up