1
Vaccine inequality and lack of financing could stifle global recovery
2
World War I anniversary: Why its impact can be felt even today
3
Why Afghanistan and China dominated India-US talks
4
Why HRW is calling for an ICC inquiry into Israeli 'war crimes'
5
Does Tunisia risk being plunged into greater violence?

According to a Credit Suisse report, global household wealth has remained ‘unscathed’ despite the pandemic.

Released at the end of October, it revealed that the top one percent of households globally own 43 percent of all personal wealth, while the bottom 50 percent own only one percent.

That top-tier one percent amounts to 52 million people who are all millionaires in net wealth (after debt). Within this elite fraction are 175,000 ultra-wealthy people (those with over $50 million in net wealth), or 0.1 percent, who in turn own 25 percent of the world’s wealth.

Credit Suisse’s annual report is a comprehensive analysis of global wealth – not income – and of the inequality of personal wealth. Household wealth is made up of financial assets (stocks, bonds, cash, pension funds) and property owned, minus debts.

Covering the wealth of roughly 5.2 billion adults across 200 countries, the report’s findings show that global wealth levels have remained remarkably steady despite the Covid-19 pandemic.

While 2019 was a year of tremendous wealth creation – rising by $36.3 trillion – $17.5 trillion was wiped out between January and March 2020 alone as the pandemic began to ravage economies.

Despite that initial plunge, global household wealth recovered, reaching $400 trillion by the end of June – $1 trillion more than the March total, after ending 2019 at $399.2 trillion – showing little evidence by mid-year that global wealth distribution had changed that much.

“Given the damage inflicted by Covid-19 on the global economy, it seems remarkable that household wealth has emerged relatively unscathed,” co-author Anthony Shorrocks said, adding as a caveat that the findings are based on provisional household balance sheets for the second quarter issued by some countries.

The question as to why the pandemic has not had a bigger impact on global wealth rests on several factors, the report’s authors argued.

One is that consumption is down, but incomes have held steady or gone up through government support, which has in turn fueled a rise in savings

The second factor is that persistent low interest rates have largely propped up global house prices and other assets such as pensions.

The third is the huge dose of government expenditure and the trillions transferred from government to households during the crisis.

The pandemic wiped out any expected gains in North America – and among the major global economies, the UK saw the biggest relative erosion of wealth for the period until June, with a 6.5 percent drop in wealth per adult. A faltering recovery combined with political brinkmanship over Brexit has created the “perfect storm” for the UK, the report said.

On China’s performance, the authors suggest that the powerhouse had “absorbed the pandemic without even blinking,” recording 4 percent growth since the start of this year. Germany and India were the only other countries back in positive territory for the year.

Hong Kong, Taiwan, Switzerland, and the Netherlands were also singled out for strong per-household wealth gains.

The hardest hit regionally was Latin America, where currency devaluations were the main factor dragging down GDP figures, resulting in a 12.8 percent reduction in total wealth in dollar terms.

Population groups that have suffered disproportionately have been female workers, millennials and minorities, primarily because of their high representation in businesses adversely impacted by the pandemic such as restaurants, hotels and retail.

Global wealth creation is expected to rebound next year as the economy recovers. The “main outlier” the report says is North America, where the economy is hobbled by the “continued weakness due to the high prevalence of Covid-19” in the US.

The number of millionaires remained stable after soaring to 51.9 million last year, while the club of ultra-high net worth individuals lost only 120 members to 175,570. The US has the most people in the top one percent wealth group and 39 percent of the world’s millionaires.

Inequality nevertheless remains persistent – both geographically and between households within countries.

One notable trend is the overall decline in wealth inequality in the US, but it comes with some caveats say the report’s authors, given the figures were released at a time when technology billionaires came under scrutiny for boosting their pandemic fortunes after millions lost their jobs.

The researchers conclude that the small decline in wealth inequality in the world as a whole “reflects narrowing wealth differentials between countries as emerging economies, particularly China and India, have grown at above-average rates. This is the main reason why global wealth inequality fell in the early years of the century, and while it edged upward during 2007-16, we believe that global wealth inequality re-entered a downward phase after 2016.” 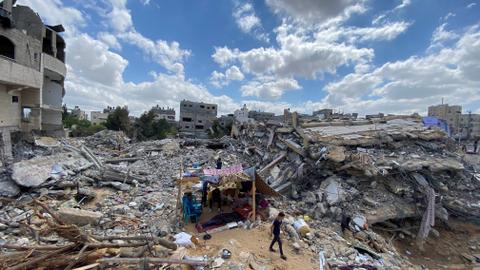 1
Vaccine inequality and lack of financing could stifle global recovery
2
World War I anniversary: Why its impact can be felt even today
3
Why Afghanistan and China dominated India-US talks
4
Why HRW is calling for an ICC inquiry into Israeli 'war crimes'
5
Does Tunisia risk being plunged into greater violence?