Gabriel Boric, a former protest leader, defeated an opponent who was a staunch defender of the notorious General Augusto Pinochet regime.

In Chile, that was apparent with the election of Gabriel Boric, the candidate of the left-wing alliance Apruebo Dignidad (Approve Dignity), to the country’s presidency on Sunday. He will be the youngest-ever president of Chile.

Boric’s election to the country’s top post is not an act of the mainstream left coming to power. In Chile, the traditional Socialist Party appeared to collapse in the face of the new Apruebo Dignidad - an alliance of leftist groups like the Communist Party and Boric’s Social Convergence group, a far-left political platform.

In this election it was the far-left versus the far-right - Boric faced up against Jose Antonio Kast, the founder and leader of the far-right Republican Party. But after the election both sides amicably accepted the results.

"It doesn't matter if you did it for me or my opponent; the important thing is that you did it, you were present, you showed your commitment to this country that belongs to each of you," Boric said after his victory was clear.

Kast also showed class in his defeat. "From today he is the elected President of Chile and deserves all our respect and constructive collaboration. Chile is always first," he said.

The rise of a young leader

The 35-year-old Boric, who only became eligible to run for the presidency this year, has risen fast from a student leader to a national leader. His rise can be attributed to a growing anti-capitalist partnership among leftist groups and his negotiating skills during the 2019 protests between the right-wing government and demonstrators.

Boric showed up without a tie and jacket after being elected to the Chilean parliament as an independent deputy in 2013, describing such a dress code as “tool of the elite.” But Boric, whose father is an oil company engineer, also understands how to talk to elites.

His mediation between leftist protesters and the government helped pave the way for a political deal to hold a referendum in 2022 to change the country’s current constitution. That constitution was made by the former Augusto Pinochet regime, an American-backed right-wing dictator, which championed the free-market economics of the Chicago Boys.

While Pinochet’s American model has made Chile one of Latin America’s richest economies, it has left the middle class and lower class people financially unstable, leading to widespread protests in 2019 and shaking the country’s political foundations.

Boric, whose ancestry is in Europe’s turbulent Balkans, was a protest leader during the 2019 anti-government protests. His platform demanded an extensive public healthcare system and better access to education, calling for an end to Pinochet's economic system, which they believed to favour the country’s elites.

“If Chile was the cradle of neoliberalism, it will also be its grave,” Boric said during a speech this year. “Don’t be afraid of the youth who want to change Chile,” he added.

In the face of violent demonstrations, which killed at least 30 people, the outgoing billionaire President Sebastian Pinera reached an agreement to hold a referendum over a new constitution. In the process, Boric broke with some of his hardliner allies to find common ground with Pinera.

Since 2019, Boric has been riding high over that platform urging a new constitution to ensure more equality by levying elevated taxes over the rich. His Sunday victory appears to prove that he is both a talented leader accepted by even his furious opponents and someone whose economic program is backed by a majority of Chileans.

"Chileans have given an example of democracy, you were part of that, I congratulate you," said Pinera, praising Boric’s leadership.

With his election to the top post, Boric will have to make good on his promises to his angry base, who expect to see the fruits of economic justice.

That’s not going to be an easy task in a country where foreign investments have long been one of the driving forces of Chilean growth due to its free trade model under centrist rule. Going toward the election, Boric, a non-centrist politician, already moderated some of his pledges such as the state’s role in the country’s economic sector.

“Count on me to unite Chile, not divide it. In my government nobody is going to risk what we’ve achieved,” said a conciliatory Boric.

But a lot of ordinary people angry about rising costs of living, which they see as a result of the country’s neo-liberal-oriented policies, demand urgent measures from Boric to make their lives better and easier.

Boric is looking to execute a wider political agenda which is not just about economic justice but also ensuring rights for native people, gays and other marginalised groups.

“His program is a very 21st century vision of the left. It’s not the traditional left. He personifies a challenge to the older hierarchy,” said Jennifer Pribble, a political scientist and Latin America expert at the University of Richmond.

He has recently appeared to distance himself from some of the more far-left positions regarding Venezuela and Nicaragua, where leftist leaders with allegedly authoritarian tendencies rule, offering criticism of those governments.

But if he moderates his positions too sharply, his firebrand supporters could turn against him, analysts warn. 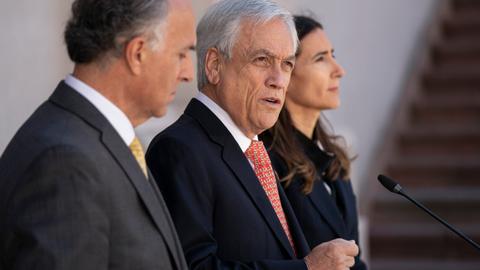