Who is Nicolas Maduro? A profile of Venezuela's embattled president

1
US House holds Trump ally Bannon in contempt for defying summons
2
Haiti gangster threatens to kill US hostages if a ransom is not paid
3
Does Biden's Taiwan remark signal a shift in US' policy of ambiguity?
4
Far-right anti-government group growing rapidly in the US - Report
5
What do we know about Queen Elizabeth II's health status so far?

The newly-elected leader is facing a coup attempt similar to the 2002 military intervention orchestrated by Washington against his predecessor Hugo Chavez. Here is a brief account of Maduro's time in power.

The authority of Venezuelan President Nicolas Maduro is facing a constant challenge from the Congress head Juan Guaido.

Even some parts of the military have joined Guaido to oust Maduro from the presidency, according to media accounts, bringing months of political wrangling to its climax.

It all started with the 2018 elections which Maduro won but were largely boycotted by the opposition. Guaido challenged the results and with the help of the US built a nationwide campaign against Maduro.

Now with a section of the army throwing its weight behind him, Guaido welcomed the move.

“The national armed forces have taken the correct decision, and they are counting on the support of the Venezuelan people,” Guaido said.

Maduro however refuses to yield and calls Guaido another "American puppet” and his backers from the military “traitors”.

What is Maduro's background, though?

The 55-year-old was born in Caracas to a working-class family. According to his personal account, his grandparents were originally Jewish and had later converted to Catholicism.

The son of a prominent union leader, Maduro started off as a bus driver and soon gravitated toward his father’s path by participating in trade unionism. He still enjoys driving and takes pride in his humble origins.

His worldview is defined by a mix of communism and socialism, the two political ideologies he followed from a young age. He received training and educational courses from different communist groups including Cuban revolutionary Fidel Castro’s communist party.

In the early 1990s, he was recognised as a close aide to Hugo Chavez, the country’s first socialist president, who led the Venezuela's Bolivarian Revolution. Chavez, a fierce anti-American politician, had successfully defeated a US-orchestrated military coup in 2002. He received overwhelming support from both Venezuelan people and the armed forces.

Maduro was later elevated to the top post in the foreign ministry. When Chavez died of cancer in 2013, Maduro assumed the interim presidency, according to Chavez's wishes.

Maduro inherited what Chavez left behind

Maduro became a democratically elected president after winning a narrow election in 2013. He defended Chavez’s version of socialism against local elites and American “imperialists”, and cultivated allies from Russia’s Vladimir Putin to Turkey’s Recep Tayyip Erdogan.

Despite his high popularity, the oil-producing Venezuelan economy experienced a steep decline from 2014 onward mainly because of decreasing oil prices. Maduro described the recession as being a result of “sabotage” engineered by "American imperialist designs".

The economic situation worsened as the US imposed harsh sanctions in 2017 against Caracas to punish Maduro for planning to rewrite the constitution and forming a new constituent assembly, which was reportedly weaponised to dissolve the opposition-controlled National Assembly.

In January 2019, after Maduro was re-elected as the president, Guaido, the President of the National Assembly, publicly challenged his authority, calling the elections rigged and declaring himself as the interim president.

Maduro rejected Guaido’s claims and to boost his popularity he participated in military exercises along with the army corps. Maduro earned fame for continuing Chavez’s policies, locally known as Chavismo.

Washington and its allies however backed Guaido. They even hosted him while he toured the supporting countries to add fuel to the anti-Maduro flame.

On April 30, Guaido led an apparent military coup, which he called "the final phase" of his plan to oust Maduro.

The Maduro government dismissed the move, calling it a conspiracy of a small fraction in the country’s intelligence agency and army.

“In this moment we are confronting and deactivating a small group of military traitors,” said Information Minister Jorge Rodríguez on Twitter. 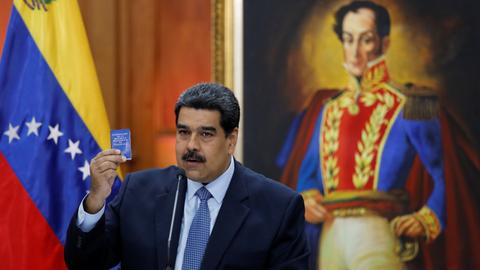 1
US House holds Trump ally Bannon in contempt for defying summons
2
Haiti gangster threatens to kill US hostages if a ransom is not paid
3
Does Biden's Taiwan remark signal a shift in US' policy of ambiguity?
4
Far-right anti-government group growing rapidly in the US - Report
5
What do we know about Queen Elizabeth II's health status so far?