Chemical investigators arrive in Syria after Douma falls to the regime

As the last Syrian rebels abandoned Douma, the world's chemical watch dog started arriving in Syria as the war of words ratcheted up over an alleged chemical that the OPCW are set to investigate.

Investigators from the Organisation for the Prohibition of Chemical Weapons have started arriving in Syria to investigate a suspected chemical attack that took place in Douma, the last stronghold of the rebels in eastern Ghouta.

The announcement that the OPCW would be investigating the alleged attack came as France's President Emmanuel Macron said that he had proof that the Syrian regime was responsible for last Saturday's attack.

It also came barely hours after the Russian military announced on Thursday morning that the Syrian regime is now in full control of the town on the outskirts of Damascus.

Speaking on TF1 television, Macron said "we have proof that chemical weapons were used, at least chlorine" in recent days by Syrian President Bashar Assad's regime. He did not elaborate on what that proof might be.

He did not say whether France is planning military action against Assad's government, but said he had been talking regularly this week with US President Donald Trump about the most effective response.

With increasing concerns about a US-Russia proxy war in Syria, Macron insisted that "France will not allow an escalation or something that could damage the stability" of the region. On Tuesday, Macron said any French action would target Syria's chemical weapons abilities. He insisted he does "not want an escalation" and that any response would focus only on Syria's chemical capabilities, not on allies of the regime.

Greg Simons, an associate Professor Russian and Eurasion Studies spoke to TRT World on the differences between Russia and the West over the alleged Douma chemical attack.

Trump and other Western leaders have followed suit and vowed that there would response to Saturday's alleged gas attack.

British Prime Minister Theresa May has called an emergency cabinet meeting for Thursday.

As it looked to head off the threat of Western strikes, the Syrian regime said it had invited the Organisation for the Prohibition of Chemical Weapons, which has blamed the regime for previous attacks, to visit the site.

In a brief statement on Thursday the OPCW said "confirms that the OPCW fact-finding mission team is on its way to Syria and will start its work as of Saturday 14 April 2018."

The confirmation came after Syria's ambassador to the UN, Bashar Jaafari, said two OPCW groups were to arrive in his country on Thursday and Friday to investigate what happened in the rebel-held town of Douma.

"These two groups will arrive separately to Syria on Thursday as well as tomorrow, on Friday," Jaafari told reporters.

"We will facilitate the arrival of the team to anywhere they want, in Douma, to check whether or not there was use of chemical substances," he said.

Meanwhile, Syrians were bracing for a possible US attack in retaliation to the alleged chemical assault that reportedly killed dozens in Douma.

Trump tweeted on Wednesday that "nice, new and 'smart'" missiles would be on their way after Russia's ambassador to Lebanon said any US missiles fired at Syria would be shot down "as well as the sources they were fired from."

If the US action follows the pattern of a previous punitive strike on Syria last year, it will begin with a salvo of cruise missiles fired from American warships in the Mediterranean.

The Russian defence ministry said in a statement on Thursday morning that the situation in the town of Douma, just east of the Syrian capital, was "normalising."

"The raised state flag over a building in the town of Douma has heralded the control over this location and therefore over the whole of eastern Ghouta," Major-General Yuri Yevtushenko, head of the Russian peace and reconciliation centre in Syria, was quoted as saying.

If confirmed, the developments would mark the last stage of the Syrian regime's takeover of the opposition-held enclave of eastern Ghouta, on Damascus' outskirts. Douma and the region of eastern Ghouta was a significant opposition stronghold during Syria's civil war, now in its eighth year.

The remaining opposition fighters in Syria's battered eastern Ghouta have surrendered their heavy weapons and their leader has left the enclave for the north, the Syrian Observatory for Human Rights (SOHR) said.

"Jaish al Islam fighters handed over their heavy weapons to Russian military police in the town of Douma on Wednesday," said the UK-based war monitor.

Their leader, Issam Buwaydani, left the enclave on the same day and arrived in opposition-controlled territory in northern Syria, the monitor said.

More than 13,500 Syrian opposition fighters and their families have left Douma this month under a so-called evacuation deal between the fighters and the Russian military, a key ally of Syrian regime leader Bashar al Assad.

The Russian Defence Ministry statement followed a chaotic day in Douma where gunfire broke out. The chaos ensued during the evacuation of the latest batch of civilians and opposition fighters after pro-government supporters attempted to raise government flags over buildings in Douma and chanted in support of regime leader Bashar al Assad before the evacuation of opposition fighters was completed.

The evacuation deal, which brings the last opposition-held area near the capital under government control, has been fraught with difficulties.

Amid earlier disagreements, a truce collapsed last week and the Syrian regime pressed ahead with its offensive.

It will be the first time that an OPCW team has moved outside of Damascus since 2014, when one of their missions came under attack after their convoy hit a roadside bomb.

The team was ambushed and two people were briefly detained. Although only one person was injured, the experience left the OPCW, whose technical staff are mainly scientists, badly shaken.

Russia has also said it will guarantee the safety and security of the mission to Douma.

The OPCW's executive council is to meet at its headquarters in The Hague on Monday to discuss the alleged use of chemical weapons in Douma. 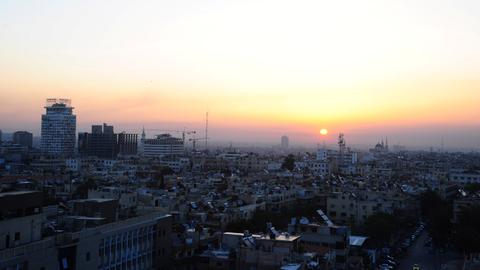 Russia warns of consequences after US-led strikes on Syria