UNSC vote on a resolution calling for a one-month humanitarian ceasefire in Syria delayed until Saturday as member states fail to reach a consensus with Russia. The death toll of this week has topped 500, a quarter of them are children.

Air strikes and artillery fire on the Syrian rebel enclave of eastern Ghouta have killed 500 civilians in seven days, 121 of them children, a monitor said on Saturday.

Deadly new strikes hit the enclave as the UN Security Council prepared to vote on a ceasefire resolution, while more bodies were recovered from the rubble from previous raids, the Syrian Observatory for Human Rights said.

The UN Security Council delayed a vote on demanding a 30-day ceasefire in Syria to Saturday noon (1700 GMT) after hours of negotiations failed to yield agreement with Russia, diplomats said.

Diplomatic haggling delayed the vote, with Kuwait's Ambassador Mansour al Otaibi, who holds the council presidency, saying "We are very close" to an agreement with Russia, Syria's ally.

It remains unclear whether Russia will veto the proposed measure.

"We have not been able to close the gap completely," Swedish Ambassador Olof Skoog told reporters following a closed-door council meeting.

"We will work tonight and hopefully, we will definitely come back tomorrow and we will vote."

US Ambassador Nikki Haley expressed dismay as the negotiations dragged out for another day on the pause that would allow for humanitarian aid deliveries and medical evacuations.

Unbelievable that Russia is stalling a vote on a ceasefire allowing humanitarian access in Syria. How many more people will die before the The Security Council agrees to take up this vote? Let’s do this tonight. The Syrian people can’t wait.

Negotiations have run into problems over a key provision of the text that specifies when the ceasefire will begin.

In a concession to Russia, the draft resolution states that the ceasefire will not apply to operations against Daesh or Al Qaeda, along with "individuals, groups, undertakings and entities" associated with the terror groups.

The text would demand the immediate lifting of all sieges, including in eastern Ghouta, Yarmouk, Foua and Kefraya and order all sides to "cease depriving civilians of food and medicine indispensable to their survival."

The measure initially called for the ceasefire to enter into force 72 hours after the adoption of the resolution, but that provision was under discussion.

Russia has vetoed 11 draft resolutions on Syria that targeted its ally in Damascus. In November, it used its veto to end a UN-led investigation of chemical weapons attacks in Syria.

World leaders have expressed outrage at the plight of civilians in eastern Ghouta, which UN chief Antonio Guterres called "hell on earth", but have so far been powerless to halt the bloodshed.

"The UN says it is concerned and calls for a ceasefire, France condemns, but they have given us nothing," said Abu Mustafa, one of the few civilians on the streets of Douma Friday morning.

"Every day we have strikes, destruction. This would draw tears from a rock," said the 50-year-old, who was escorting a wounded person to a hospital.

The enclave has been controlled by the opposition as well as some militant groups since 2012.

The main opposition groups in eastern Ghouta rejected any deal that would see them or other residents relocated.

"We categorically reject any initiative providing for inhabitants to leave their homes and be transferred towards any other location," they said in a letter addressed to Guterres.

The area is completely surrounded by regime-controlled territory and residents are unwilling or unable to flee the deadly siege.

More than 340,000 people have been killed and millions driven from the homes in Syria's war, which next month enters its eighth year with no end in sight. 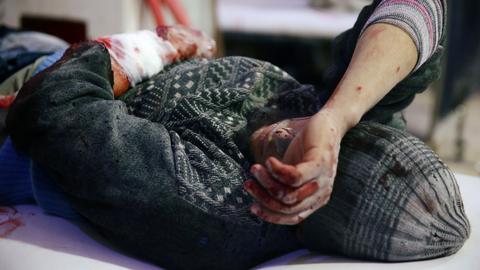 Why is Syria's starved, opposition-held suburb under attack?